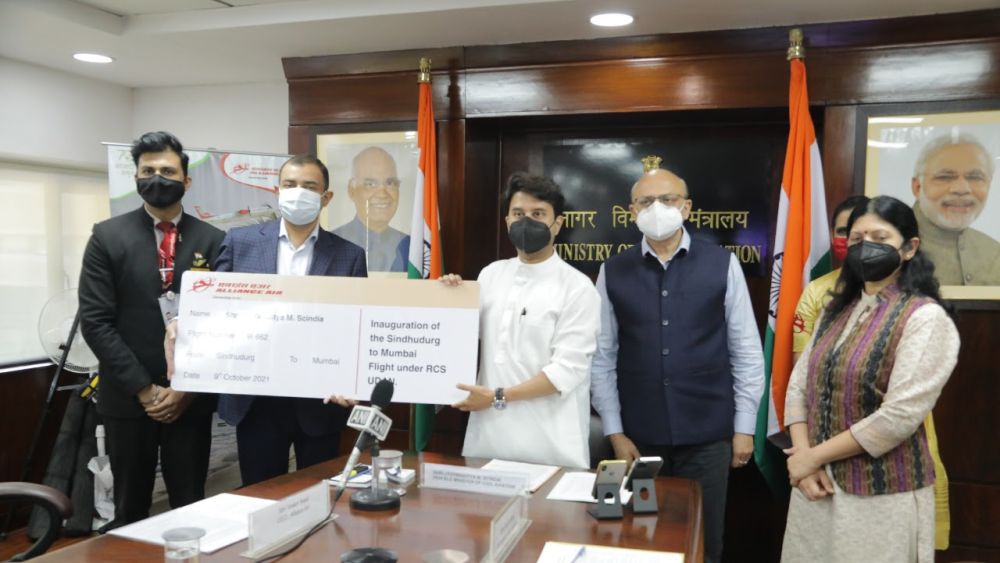 The Sindhudurg airport and start of flight to Mumbai marks a new chapter in the glorious history of the Konkan region. This development will open new avenues of growth of local trade and tourism.

It was flagged off by Union Minister of Civil Aviation, Shri Jyotiraditya M. Scindia. The event marked  the first flight from Sindhudurg to Mumbai under the RCS-UDAN (Regional Connectivity Scheme - Ude Desh Ka Aam Naagrik) scheme of the Government of India.

Sindhudurg Airport also known as Chipi Airport is in Sindhudurg District of Maharashtra. The airport is spread over 275 hectares area. The runway length is 2500 mtr. (8202 ft.) and is capable for the operation of narrow body aircraft like Airbus A-320 and Boeing B-737. The airport Terminal Building has the capacity to handle 200 departing and 200 arriving passengers during peak hours.

The inauguration marked the commencement of the 61st airport under the UDAN scheme and successful operationalization of the 381 routes under UDAN. Now people can fly at ease by opting for a flight of 85 mins from Sindhudurg to Mumbai while earlier they were forced to opt for a road or train travel of more than 10 hours between these two cities.

The airline M/S Alliance Air was awarded the Sindhudurg – Mumbai route under the UDAN 3.1. This is the 75th UDAN route operationalized by the airline. Alliance Air will deploy its 70-seater ATR 72-600 aircraft on the route.

The financial incentives in the form of Viability Gap Funding (VGF) is being provided from the Centre, State governments & airport operators to selected airlines to encourage operations from unserved and underserved airports under the scheme.

To date, 381 routes and 61 airports including 5 heliports and 2 Water Aerodromes have been operationalized under the UDAN scheme.

The UDAN flight schedule is mentioned below: