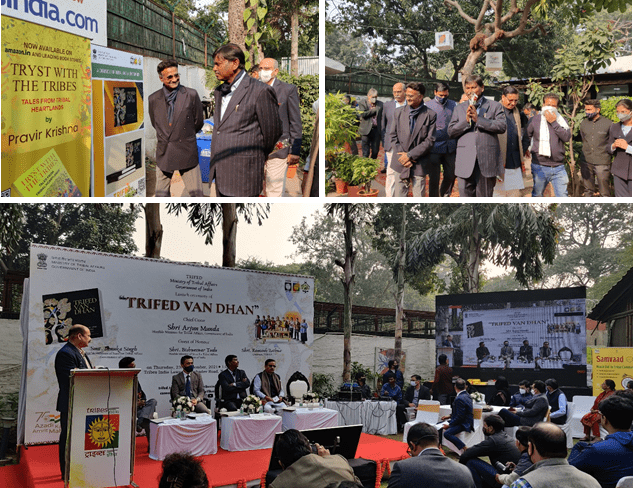 Initiatives included the launch of the TRIFED VanDhan Chronicle, an in-depth resource on the Van Dhan Yojana and TRIFED’s activities in this important scheme; 9 promotional videos on TRIBES INDIA, TRIFOOD, MSP for MFP and Van Dhan Yojana made by National Film Development Corporation (NFDC) and 14 Honey  Farmer Producer Organisations. In addition, UNICEF and TRIFED signed an MoU on Tribal Samvaad Network.

Speaking on the occasion, Shri Munda remarked, “I am delighted to launch all these noteworthy initiatives that TRIFED has been working towards, such as TRIFED VAN DHAN Chronicle.  Implementation of this crucial resource will definitely result in communicating about the large number  of livelihood activities  that TRIFED has undertaken which have impacted the life of more than 16 lakh tribals; and also serve as a manual for the officers who will work on these activities in future. The Launch of the comprehensive MIS portal will also ensure ready availability of procurement data that can help in effective decision making and enhancing overall transparency.  It is commendable that the Ministry of Tribal Affairs and the TRIFED team has achieved quite a lot over the past few years despite the difficult circumstances.”

The Minister further remarked that collaboration with UNICEF will help in connecting, interacting and bringing prosperity among the tribals who have suffering from neglect over a long period of time.

He also said that as the nation celebrates Azadi Ka Amrit Mahotsav ,there is need to intensify the programmes and activities for welfare of tribal people  to achieve a prosperous India when it completes 100 years of independence.

TRIFED has been implementing several noteworthy programmes for the empowerment of the tribals. In a short span of two years, it has successfully now sanctioned 52976 Van Dhan SHGs subsumed into 3110 VDVKCs covering 9.27 lakh beneficiaries & 27 States/UTs. These VDVKCs are at different Stages of development and many success stories have emerged till date. The VDVKCs in Maharashtra, Manipur, Tamil Nadu, Karnataka, Odisha, Kerala, Tripura, Gujarat, Sikkim, Andhra Pradesh, to name a few along with all the 27 participating States have begun producing almost 600 varieties of products. Under Retail Marketing,  a total number of 144 Tribes India Outlets have been opened till date. Besides, two TRIFOOD Projects at Jagdalpur and Raigarh (Maharashtra) are being shortly commissioned  for undertaking value-addition of various forest products being procured by beneficiaries of Van Dhan Kendras.

The TRIFED Van Dhan Chronicle documents the work done for the promotion of tribal enterprises in the country and the achievements of tribal entrepreneurs under the Van Dhan Vikas Yojana. The chronicle gives an in depth illustration of the activities undertaken by TRIFED which has impacted the life of almost 16 lakh tribals; including the introduction of Minimum Support Price (MSP) for select forest produces, training imparted, value addition that began in VDVKCs, new product lines developed, new ideas for packaging and marketing implemented, achievements so far and future plans. 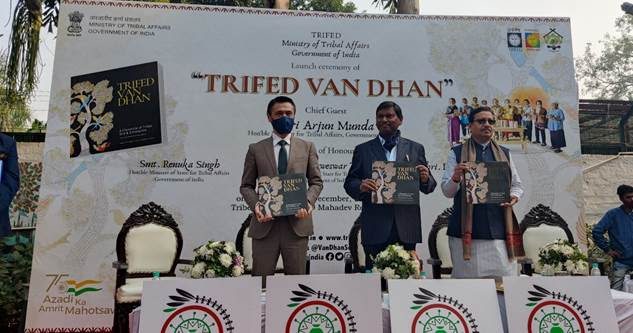 9 Promotional Videos to spread the word and communicate effectively on Tribes India, TRIFOOD, MSP for MFP & Van Dhan Vikas Yojana were also launched today. These attractive informational videos have been developed by National Film Development Corporation (NFDC) and will soon be on air.

The MIS Portal for Minimum Support Price for Minor Forest Produces, which was launched today, is a ready dashboard for the authorised users of The Ministry of Tribal Affairs and TRIFED. In this dashboard, data is available on a real-time basis, pertaining to the list of procurement centres and their locations (including display pins on maps), and the procurement of MFPs being done across the country. This portal is being launched to ensure ready and online availability of procurement related data for analysis and fast and effective decision making and will go a long way to ensure transparency in the procurement activities and give a reflection on the performance and efficiency of the different states and districts. 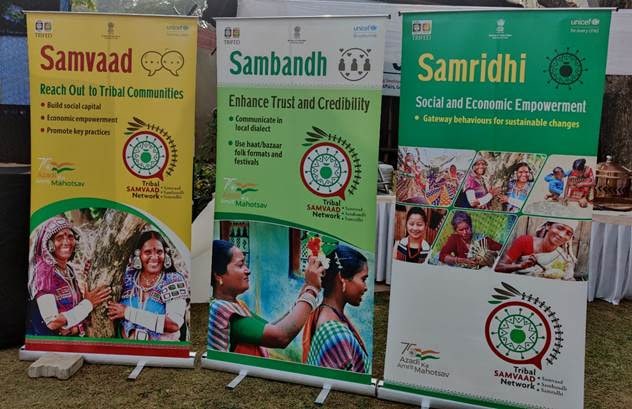 Beekeeping activity has been recognized as one of the important activities by Govt of India for its promotion and development to achieve “Sweet Revolution” in the endeavor of enhancing income of farmers. A central scheme titled “Formation and Promotion of 10,000 Farmer Producer Organizations (FPOs)” was launched to ensure economies of scale for farmers over the next five years.

Under this scheme, special emphasis has been laid on beekeeping by the formation of 100 FPOs in identified potential Districts/States. The National Bee Board (NBB), under the National Beekeeping & Honey Mission (NHBM), has planned to develop the scientific bee-keeping value chain for honey across 100 clusters in the country.  TRIFED has been made the implementing agency by Ministry of Agriculture to undertake the formation of 14 Honey FPOs alongside NAFED and NDDB in the states of Chhattisgarh, Himachal Pradesh, Uttarakhand, Tamil Nadu, Karnataka, Andhra Pradesh, Odisha and Gujarat. These 14 Honey FPOs were launched by the  Minister today.

In continuation with its partnership with UNICEF, TRIFED rolled out a campaign “Covid teeka sangh, Surakshit van, dhan udyam” which was aimed at accelerating Covid-19 vaccination in tribal communities. The focus of the campaign is on three key Js i.e., Jeevan (Life), Jeevika (Livelihood) and Jaagrookta (Awareness and the mantra of the campaign was “Samvad se Sambandh.” It had been launched by. Minister of Tribal Affairs in collaboration with UNICEF and WHO and is being currently rolled out in 100 tribal districts across India.

Given the success of ongoing partnership, UNICEF and TRIFED have come together to launch “Tribal Samvaad network” - Tribal network for Social and Behaviour Change  (A people-to-people ‘prosperity’ platform built on the emergent digital, social, alternate and mobile revolution). Using this vast network which includes more than 90 million tribals, 52,976 Van Dhan SHGs, 3110 VDVK Clusters, market associations, haat bazaars and the Tribes India network and the State agencies, TRIFED and UNICEF aspire to create a robust communication system and platform that encompasses not only the VDVKs but also this huge base of 90 million people.

TRIFED and UNICEF will use multiple channels and communication strategies and tools for economic and social empowerment of tribal communities. An Understanding was signed between TRIFED and UNICEF today to seal this partnership. 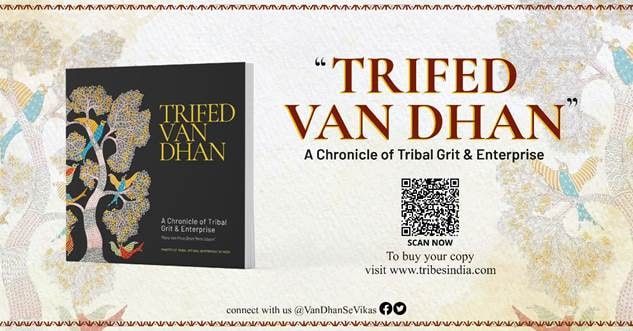 Research Report prepared in collaboration with JD Center of Arts on Tribal Livelihood of Odisha:

TRIFED in collaboration with JD Centre of Arts undertook a socio-cultural research work and anthropological study of tribal art and tradition in Mayurbhanj, Keonjhar, Sundergarh, Koraput and Rayagada districts of the state of Odisha. The research report titled, ‘Tribal Livelihoods: From Sustenance to Sustainability’, highlights the creative capabilities of tribal groups and their interconnectedness with the surrounding environment. This report constitutes a knowledge repository of tribal art and craft and also encompasses the elements that govern the tribal lifestyle and livelihood to promote socio-development of the tribal communities. The knowledge repository encompasses cultural, social and historical background of 7 musical instruments, 2 paintings and textiles, 3 livelihood art and craft, more than 20 sets of tribal jewelry and 72 MFPs with medicinal properties. The research report was unveiled by the  Minister of Tribal Affairs also today.