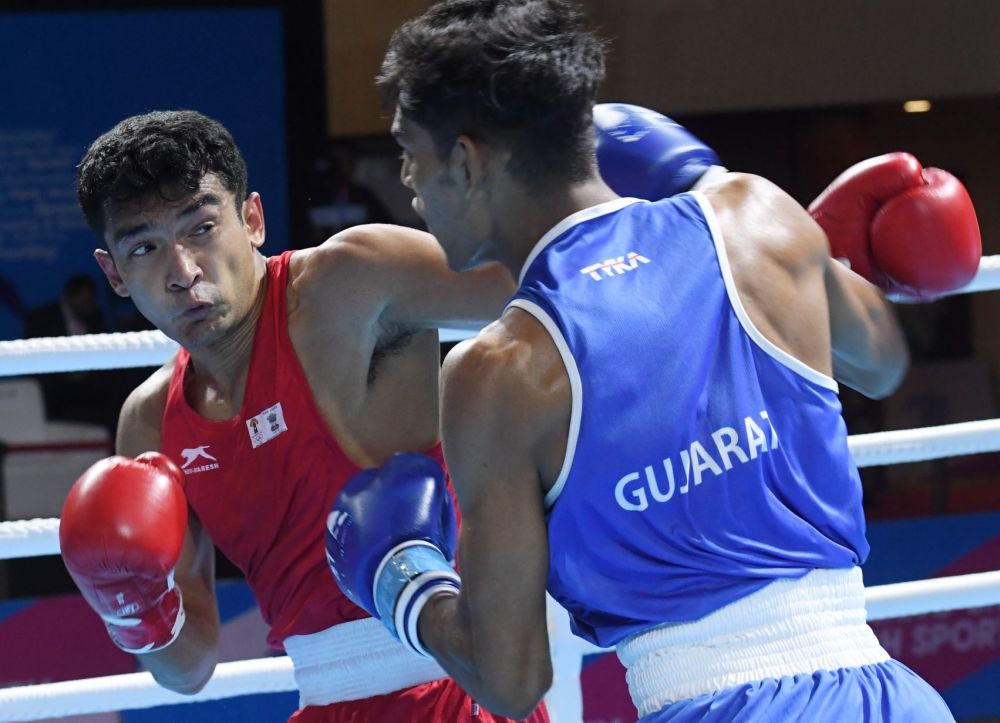 Dominating the ring, world championships medallists Simranjit Kaur and Shiva Thapa thrashed their respective opponents, and advance to the quarterfinals of the 36th National Games at the Mahatma Mandir here on Friday.

World youth champion Sachin Siwach (57kg) of Haryana, who recently bagged a bronze in the Elorda Cup in Kazakhstan, also progressed to the last eight after dishing out a clinical show.

Asian championship bronze medalist Saweety Boora of Haryana got off to a winning start in the women’s 75kg middleweight division pre-quarterfinal bout.

The 2018 world championship bronze medallist dominated the proceedings throughout the contest, starting the bout by landing a few headshots before using her combination punches to good effect against the 23-year-old UP boxer, who looked clueless across the three rounds.

Simranjit, who was part of the Tokyo Olympics team, managed to breach through her opponent’s defence on multiple occasions, before forcing the referee to give a standing count of eight to Rinki in the final round, en-route to her unanimous 5-0 victory.

Besides Simranjit, the other Punjab boxers to shine were Diksha Rajpoot, who outclassed Telangana’s Narmada Munigi to clinch a RSC first-round win in the women’s middleweight 75kg division.

In men’s lightweight 57kg, Vijay Kumar of Punjab recorded a stunning 5-0 win over Karnataka’s Krian BK, while in welterweight 67kg, Vikash knocked out Bihar’s Haider Ali in the opening round.

Shiva, known for his swift movements in the ring, warmed up in style by recording a 5-0 unanimous verdict win over home pugilist Aniket J Pandey.

“The National Games is the perfect platform to assess the talent in your weight category across the country. Every bout is important, doesn’t matter who the opponent is, we treat everyone as equal,” he said.

“As the weight divisions have changed, there are many boxers who have come up from 63.5kg to 67kg and many from higher weights have come down, so the competition level has automatically gone up,” Shiva said after the bout.

Sachin, who has been in the rollicking form of late, came out all guns blazing against Arunachal Pradesh’s Amir Tajo, in the men’s 57kg featherweight category bout. Going into the clash as a clear favourite, Sachin lived up to his billing and clinched the contest by RSC.

For the hosts, Asifali Asgharli Syed was the lone winner on the day, as the other boxers in action failed to get past their opponents. Syed registered a 5-0 win against Bihar’s Manish Kumar in the men’s 57kg featherweight category.

In the other bouts of the day, Assam’s Manju Basumatary registered a thrilling 3-2 win over Gujarat’s Hetal Sundarji Dama in the women’s flyweight 52kg opener, while Madhya Pradesh’s Anjali Sharma (52kg), Manipur’s Ojibala Thounaojam (52kg), Himachal Pradesh’s Dimple Upadhayay (60kg), Delhi’s Shalakha Singh (75kg) and Himachal’s Shreetima Thakur (75kg) also made it to the next round.