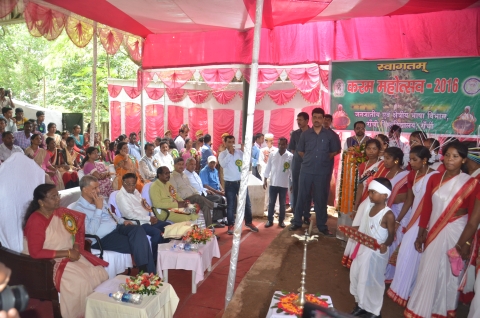 Scores of tribals were on the Cloud 9 right now.They were celebrating their annual festival-Karma.

To celebrate the festival,all state government offices were closed.Inside every village in rural area and colony and mohalla in urban areas dominated by Adivasis across the state, were in grip of festivity.

Jharkhand Governor Draupadi Murmu did not lag behind.She,who herself is an Adivasi,participated in a programme at Ranchi University’s Department of Regional and Tribal Languages at Morahabadi Maidan in Ranchi.While attended the programme,she talked about the meaning and significance of this festival in tribal society and wished the people ‘Happy Karma.”

As it is,Karma (Karam) festival is celebrated mainly by the Oraon, Baiga, Binjhwari and Majhwar tribes of Jharkhand,Madhya Pradesh, Bihar and Chhattisgarh.This festival falls in the Hindu month of Bhadrapada-Agust-September when monsoon comes close to complete kit cycle.

Traditionally,the Karma festival is related with fertility.On this day,people go to the forest to collect fruits and flowers, and worship Karma Devta,a goddess who is represented with a branch of Karam tree . As part of a ritual,devotee cuts three branches of the ‘Karam’ tree,and their counterparts dance around in the open space ‘akhara’.

These branches are called ‘Karam Raja’. After the dance, tribal priest narrates the significance of this ritual and the legends of Karam Devi, who is believed to be the goddess of wealth and children. Then, they sing and dance whole night.

As per the tradition,these branches are to be garlanded and offerings of flowers, rice and curd spread around these Karm branches.Red colored baskets filled with grains are placed before the branches. Barley seedlings are distributed among the young people, who wear it on their heads. Branches are worshipped and their blessings sought.

The festival of Karma, also known to be a religious festival, calls for huge celebration among the tribals of Jharkhand. On the day of this festival devotees keep fast of complete 24 hours. The cultural performances are observed keeping a branch of a Sal tree in the middle of an open ground.