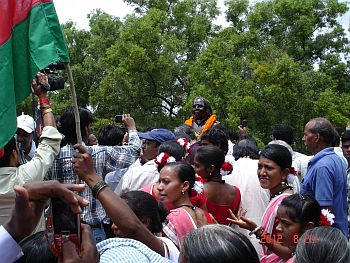 Crowd at Dr Ram Dayal Munda park in the making.

When Governor Syed Ahmad laid the foundation stone of the park in the  name of late Dr Ram Dayal Munda,MP,scores of people gathered there to pay tributes to him at the venue-Morahabadi Maidan in Ranchi.

The park is planned to be spread along the lower side of the Maidan where the State Guest House was located.The project to develop it was conceived by the Chief Minister Arjun Munda.Now,since the Munda government had fallen and the President’s Rule imposed in this state,Ahmad laid its foundation stone.

Dr Munda,a multi facted social activist of Jharkhand,had played a key role in creation of Jharkhand as a separate state,ushering in a democratic movement in this region when it was still a part of the erstwhile Bihar.The 72 year old Munda,who passed away in Ranchi today,was honoured with the Sahitya Academy Award and the Padamshri by the President of India Pratibha Singh Patil last year.

After he returned home,he joined the RU,set up its Deaprtment of Tribal and Regional Languages and became its Head of the Department.Subsequently,he was appointed as its Vice Chancellor in 1985.

This was the time when the people of this state had been fighting for creation of Jharkhand as a separate state led by the Jharkhand Mukti Morcha President Shibu Soren.As RU VC Munda provided intellectual base for sustenance of the agitation for Jharkhand and helped set up All Jharkhand Students Union and the Jharkhand Coordination Committee.

For the first time,the AJSU-JCC led agitations drew the attention of the then Prime Minister Rajiv Gandhi opening the doors for a dialogue between the Centre.This led to setting up a Committee on Jharkhand Matters.Munda was one of its members.Later the Centre assigned him to chair the Planning Commission’s Working Group on Empowerment of the Scheduled Tribes during the Tenth Plan.Munda was also a participant at the deliberations of the UN Working Group on Indegenous Populations at geneva and the UN Permanent Forum on Indegenous Issues in New York.

As an author,Munda authored several books and papers on the tribal languages,cultures and politics of the Jharkhand region.Amongf them were Adivasi Astitwa Aur Jharkhandi Asmita Ke Swal and Jharkhand Movement.

As a politician,he had contested the Assembly elections from the Ranchi seat as an Independent candidate in 1995 and the Lok Sbha elections from Khunti on the JD(U) ticket in 2009.Though he had lost security deposits in both these elections,the Congress party nominated him as Rajya Sabha MP in 2010.

Munda,who played drum and flute,led a team of performing artists –dancers and singers-in a series of cultural programmes including the one organized by the ICCR in New Delhi in 2009.Realising the need to preserve and promote tribal languages,he had last week announced to provide Rs four crore from this MP Area Development Fund for setting up here a centre on top of the Tagore hill.

He,who was suffering from cancer had died due to the same disease in Apollo hospital here on September 30,2011.