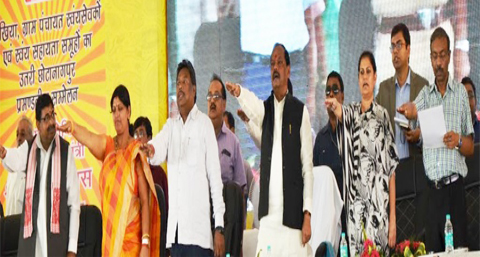 Picture shows Jharkhand CM Raghubar Das,Chief Sectretary Raj Bala Verma,Additional Chief Secretary Amit Khare, his Principal Secretary Sanjay Kumar and others standing at the dias of the public meeting of SHGs of women at Carzon Ground in Hazaribagh on September 12,2016.

In a public meeting with North Chotanagpur Division’s Self Helf Groups of women in Hazaribagh on Monday,Jharkhand Chief Minister Raghubar Das declared that 3 lakh SHGs will be set up and Rs 2000 crore will be spent on them in the next two years.

My intention is clear.My aim is development of the state and put Jharkhand in the map of the developed states of the country”,said the CM while addressing the members of the SHGs of women at Carzon Ground in Hazaribagh.

He said that his government aims to bring electricity in 30 lakh houses in the coming three years.The CM was accompanied by Chief Sectretary Raj Bala Verma,Additional Chief Secretary Amit Khare and his Principal Secretary Sanjay Kumar.