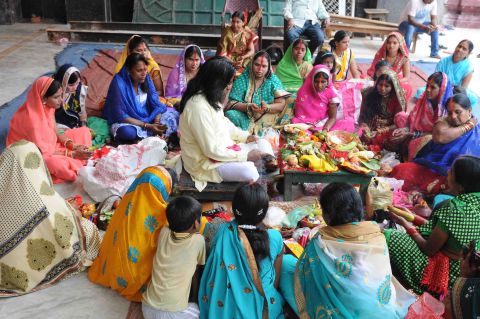 In her message, Seeta Devi wrote,”I wish all my married female friends living in the country and abroad happiness, peace, prosperity, and family harmony on this auspicious occasion of Teej festival which has remained as a symbol of cultural tolerance and social unity in North India,especially Rajasthan,Gujarat,Utter Pradesh,Bihar-Jharkhand,West Bengal,Orissa and Nepal since time immemorial.”

She also urged women to maintain religious and cultural identity of Teej. On the occasion, married Hindu women observe rigid fast all day and worship Lord Shiva wishing for the longevity of their husbands.

Teej falls on the third day of Shukla Paksha (bright fortnight) in the month of Bhadra. Women celebrate the festival by fasting, singing, dancing and offering prayers to Lord Shiva. The festival also marks the union of Shiva and Parbati.

The second day is the fasting day or the main day of Teej. Women spend the day without a morsel of food and some even a drop of water. The third day of the festival is Rishi Panchami. Women pay homage to seven saints or sages and offer prayers to various deities and bathe with red mud found on the roots of the sacred datiwan twig, along with its leaves. This act of purification is the final ritual of Teej.

Since Teej is celebrated on mid of monsoon,it is considered as a festival of indulgence,clothes,ornaments and delectable food,especially Payrakiya prepared by women of the households.