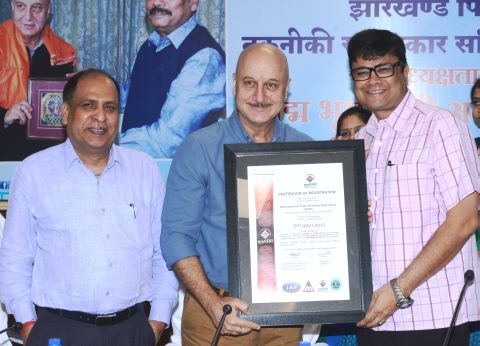 Jharkhand government gained another feather in its cap when its Information and Public Relations Department was given prestigious ISO 9001-2015.

The tag was handed over to Principal Secretary Sanjay Kumar and Director AK Pandey by noted actor and Padam Bhshan Anupam Kher inside Project Bhawan in Ranchi on September 2,2016.

Kher praised the works done by IPRD.He said that during the past few months,he had come to Jharkhand a number of times.”Many opportunities are seen in this state.Its officers-staff are working well.The proof lies in this award-ISO:9001:2015.”

Incidentally,IPRD in league with other departments had popularised the Raghubar Das government’s Film City plan.This had shown that IPRD headed by Kumar and Pandey had the strength and enterprise to act professionally.