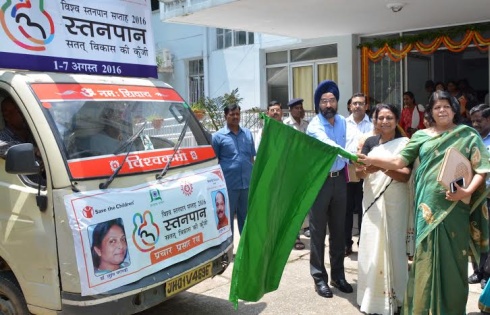 As the World Breastfeeding Week began on August 1,the top functionaries of the state government flagged off a campaign vehicle as part of its inaugural ceremony.

The campaign vehicle was flagged off by Women and Child Development Minister Louis Marandi and Principal Secretary Mridula Siunha in Ranchi on Monday.

The vehicle is supposed to move around in the state to promote the cause and practice of breastfeeding among women across the state.The World Breastfeeding week is slated to end on August 8,2016.

The survey was conducted in five districts-east Singhbhum woth IMR of 25,Dhanbad-26,Bokaro-28,Giridih-28 and Koderma-27 in the state.This means that the state has already achieved the millennium development goal of reducing the IMR to 28.

Another four districts-Hazaribagh-29,Ranchi-30,Deoghar-31 and Garhwa-33 are on track to achieve the goal now,it is learnt. However,the rate is high in the districts of Godda-54,Shaibgunj and Lohardaga-53 each,according to the same data.