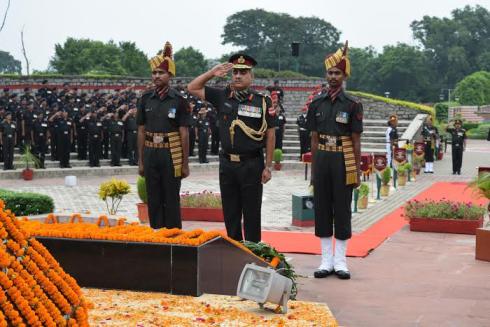 During the day, the proceedings opened with a solemn Wreath Laying Ceremony at the Jharkhand  War Memorial led by Lt Gen Rajeev Chopra, GOC, Brahmastra Corps and Officers, JCOs and Other Ranks of  Brahmastra Corps and Cockerel Division.Next of kins of martyrs, Veer Naris and senior Army Officers also paid tributes to the martyrs.  This was followed by felicitation programme of  Veer Naris and Veterans of the Kargil conflict.

Vijay Diwas-1 : GOC, Brahmastra Corps pays homage to martyrs of the 1999 Kargil war on the occasion of Kargil Vijay Diwas in Ranchi on Tuesday. Pix by Ratan Lal