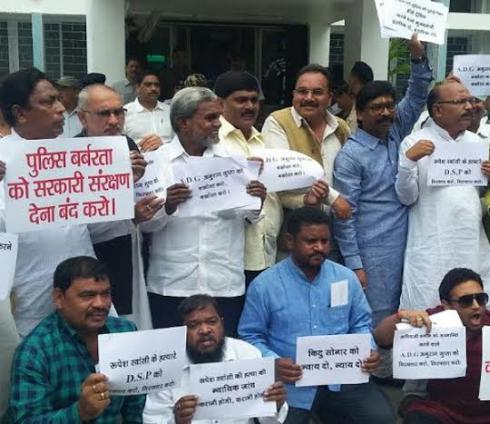 Picture by Ratan Lal shows Opposition MLAs led by Leader of the Opposition Hemant Soren(Second from right) protesting against the ruling BJP government inside the Jharkhand Assembly complex on July 25,2016.

The monsoon session of the Jharkhand Assembly was in the grip of protest launched by the Opposition on Monay.

The Opposition MLAs shouted slogans demanding resignation of the Chief Minister Raghubar Das on the allegation of horse trading and demanded dismissal of the Additional Director General of Police Anurag Gupta.

The Opposition MLAs entered into the well of the Assembly and raised slogans against the Chief Minister Raghubar Das and demanded dismissal of the ADGP Anurag Gupta.

Gupta,according to a sting operation,had talked to an MLA and told him not to cast vote thereby backing the ruling BJP candidate win the Rajya Sabha polls held recently.The Opposition MLAs led by the leader of the Opposition and Acting President of the Jharkhand Mukti Morcha Hemant Soren have demanded his dismissal from the service.

Amid the Opposition’s protest,the ruling party tabled the Rs 450 crore Supplementary budget and the session was adjourned till Tuesday.The Opposition MLAs however continued their protest outside the Assembly as well.

Also,these Opposition MLAs took out a procession inside the Assembly complex and demanded a probe into the death of the Sub Inspector of Topchanchi Umesh Kashhap inside the police station of Topchanchi in Dhanbad district where his body was found hanging from a ceiling fan.