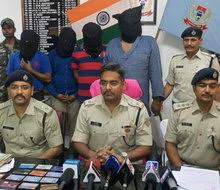 The police have arrested four men belonging to a private company on charges of fraud and misappropriating about Rs 100 crore.

Their modus operendi was simple.They approached the investors,mobilised them,collected money by promising them high return from their investment in the market.

Ranchi SSP Kuldip Diwedi on Saturday said that the police had recovered forged documents,several PAN cards,ATM,Passbooks and four luxury cars from their possession.

The FIR filed at the Lalpur police station in Ranchi indicates that the accused collected huge sums of money from the clients by promising them investment with high rates of return.The police claimed that they had misappropriated about Rs 100 crore from them.