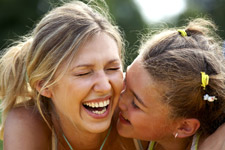 Scientists say the sound of roaring laughter is far more contagious than any cough, sniffle, or sneeze. When laughter is shared, it binds people together and increases happiness and intimacy. Laughter also triggers healthy physical changes in the body. Laughter also strengthen your immune system, boost your energy, diminish pain, and protect you from the damaging effects of stress. Best of all, this priceless medicine is fun, free, and easy to use.

Yet in Newyork,a man was in the dock on charges of disturbing the peace by laughing too loud,according to an ANI report.

The report quotes Robert Schiavelli of Rockville Center saying that he had never thought laughing could get him in trouble with the law.

“Police came to Schiavelli’s home on February 12 and February 13 after neighbours complained that his laughs could be heard across the driveway:,said the same report quoting ABC News.

“Schiavelli – considered disabled because of neurological impairments – said that his neighbours kept staring, eye-balling and mocking him, and he uses laughter as a defense mechanism.

Rockville Center police issued the 42-year-old two tickets, including one for ‘disturbing the peace the night before’.Each summons carries a 250-dollar fine, and Schiavelli could face 15 days in jail.

His attorney Andrew Campanelli said that he is fighting to keep his client out of jail”,adds the report.