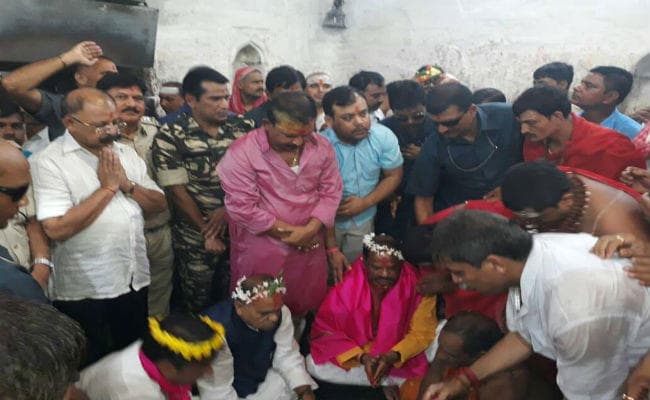 Month-long ‘Shravani Mela’ kicked off from Dumma on Bihar-Jharkhand border on Sunday as thousands of devotees embarked on the journey to Baidyanath Temple at Deoghar to offer holy water of Ganga River to Lord Shiva.

The festival was inaugurated by Chief Minister Raghubar Das.By offering puja at 12.30 pm,the CM recalled that he himself had performed the role of Kanwaria(devotee who walks for miles carrying the holy water from and offered it over the Lord Shiva at Baba Dham) for nine times.

Das said that due to the blessings of the Lord Shiva he had become the CM of Jharkhand.Right now,the CM said he was busy planning to build a world class network of Basukinath and Deoghar sites so that it can become a religious site.

As it is, Dumma is a transit camp for Kanwarias—devotees carrying holy water— especially put up to make them rest during the course of the journey to Deoghar. The inaugural function was attended by Urban Development Minister CP Singh.

The sanctum sanctorum of the temple was opened for the devotees after ritual worship in the morning and ‘argha’ system was introduced which will continue till the end of the month of Shravan.

Keeping in view the threat to the fest and to thwart any subversive activity, Deoghar district administration has decided to station 65 Deputy Superintendents of Police, 44 Inspectors, 672 police officials, 2400 armed forces, 5400 canon party and 1320 jawans of Home Guard besides, officials of Central Reserve Police Force and National Disaster Response Force at every nook and corner in the city.