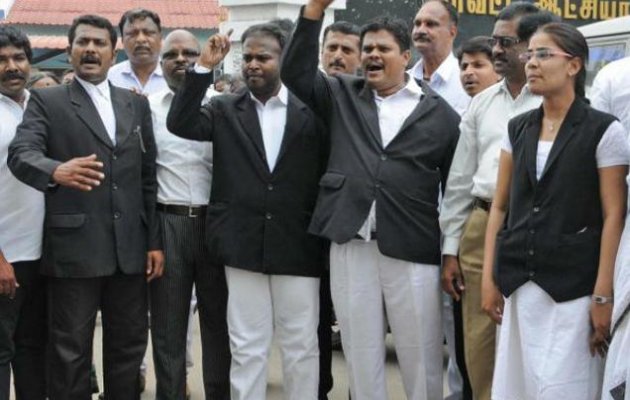 Lawyers are up in arms demanding protection from the government. This is evident from the move of the Jharkhand State Bar Council making an appeal to the Government to frame the Advocates Protection Act.

This demand is in view of their perception that lawyers were at risk of being attacked by aggrieved litigants. The Council members have raised the demand in a meeting with Jharkhand Chief Minister Raghubar Das.

Advocate General and president of the Bar Council Ajit Kumar and General Secretary of Ranchi District Bar Council Sanjay Vidrohi told the CM that nature of their works is such that they have to regularly deal with the law enforcement agencies as well as the unlawful elements.

Their representatives stated that on several occasions some of the litigants get unjustly aggrieved and seek to avenge by way of unlawful measures. They pointed out that under the circumstances the government should frame a law which provides protection from an unjustly vengeful attitude of such people.

While stating that the monetary position of several advocates in the state was not good, the office bearers opined that medical insurance coverage must be provided to the lawyers of the state under the Auyshman scheme.

Also, they asked the government to waive off the cost of land provided for the Lawyer’s Academy in Doranda. In fact, the council possesses approximately 44 decimal of land at North Para, Doranda where it seeks to establish the academy for continuing legal education of lawyers. However, the formal transfer of land from the government to the council is yet to take place.

They have sought the support of the state government for its legal awareness and legal aid assistance programme.

Though the response of the CM was not known, Kumar said, “Several welfare schemes for the lawyers including the Advocates Protection Act and the Ayushman Bharat scheme were taken up during the brief meeting with the CM. The CM has responded positively to the demands”.