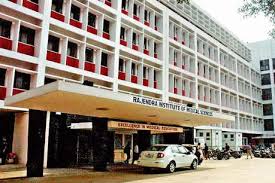 For the first time, an ally of the ruling Congress and JMM led by Chief Minister Hemant Soren is up in arms against a separate isolation ward being created for suspected coronavirus patients at the state government-run RIMS hospital in Ranchi.

RIMS hospital is where the multi-million rupee fodder scam convict ex Bihar CM Lalu Prasad Yadav has been undergoing treatment for quite some time. From available information, a group of RJD supporters wanted Lalu Prasad Yadav to be shifted to Delhi based AIIMS.

However, the AIIMS management had declined to accept the reference made by a committee of RIMS doctors to admit him at AIIMS on 'opinionated' medical ground. Faced with failure, RJD supremo Yadav's family members and supporters have now opposed the setting up of an isolation ward at RIMS. The ward is being made for quarantine suspected cases and treat those who test positive.

Though neither any patient had tested positive nor Yadav was a quarantine suspect, Lalu's supporters contended that many persons daily visited the RJD leader on the first floor of the Paying Wing. The location of the isolation ward was on its third floor."This would   'endanger' Lalu Prasad Yadav's life, they feared.

The decision to set up the isolation wing comprising 18 rooms are coming up on the Jharkhand government's order in the wake of increased vigil against coronavirus across the world including Delhi.

Asked RIMS Director Dinesh Kumar Singh replies that the hospital had ordered for 20,000 masks to handle the situation. He said that apart from precautions like washing hands and avoidance of crowded places, people also have to guard against rumours about the disease.

He maintained that Jharkhand's residents need not worry since no coronavirus case had been reported in the state or neighbouring states.