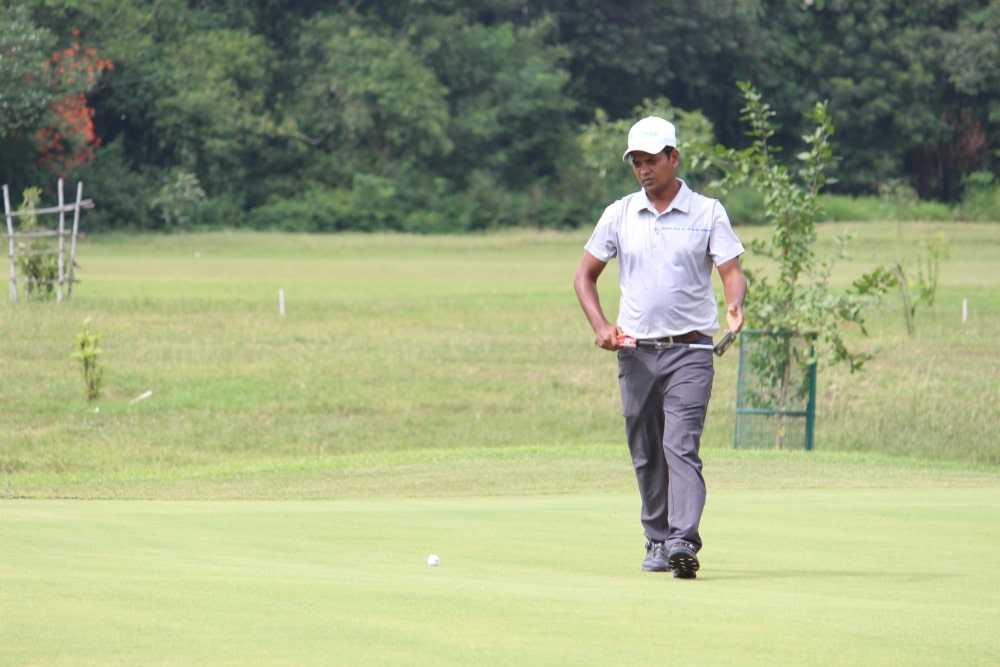 Bangladesh's Badal Hossain returned  7-under 65, the day's best joint score and with an overall total of 16-under 200  emerged sole leader at the end of the third and penultimate round of the  TATA Steel PGTI Players Championship here Thursday.

First, two rounds leader Jamal Hossain slipped to be tied at third place with Sri Lanka’s N Thangaraja with identical overall scores of 12-under 204 trailing the leader by four strokes. Tied at fifth place with an overall score of 11-under 205 after 54 holes are the Chandigarh duo of Abhijit Singh Chadha and PGTI Order Of Merit leader Ajeetesh Sandhu, Bengaluru’s Khalin Joshi and Gurugram’s Manu Gandas.

Badal Hossain’s round of 7-under 65, the day’s joint best score, consisted of eight birdies and a solitary bogey. After starting on a shaky note with a bogey on the first hole, Badal who played alongside Sri Lanka’s N Thangaraja and fellow countryman and roommate Jamal Hossain, began to find his touch with his ball-striking from the sixth hole onwards. As a result, the 31-year-old from Savar Golf Club picked up back-to-back birdies on the sixth and seventh after which he didn’t look back. Badal, yet to win his first title on the PGTI, hit a purple patch after the turn making six consecutive birdies from the 10th to the 15th.

Speaking about his third-round performance  Badal said, “It was a great day today, especially with my putter, as I sank three 10–15-footer birdie putts. I started with a bogey but I felt good about my hitting from the sixth hole onwards, that’s the reason I sank a number of birdies from there on. Playing alongside my friends Thangaraja and Jamal, who is also my roommate, I felt a lot more relaxed out there on the course. It’s a new day tomorrow and all I plan is to stick to my game and maintain my rhythm.”

Sandhu carded a bogey free round of , to match the day’s lowest score also shot by Badal.  His round consisted of three long conversions, three quality up and downs from the bunker and two brilliant par-saves on the 17th and 18th.

Jamal’s 71 featured five birdies and four bogeys while Thangaraja’s round of 70 included four birdies and two bogeys. Three-time PGTI Order of Merit winner Rashid Khan is tied 21st at 5-under 211, defending champion Chikkarangappa S is tied 34th at 3-under 213 and Olympian Udayan Mane is tied 46th at even-par 216.