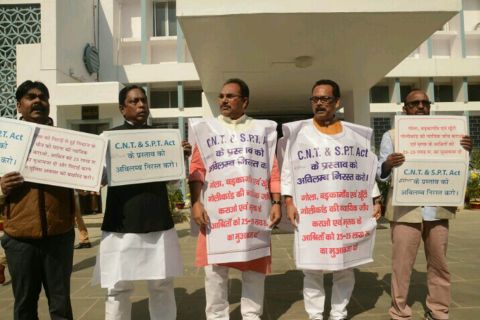 Ranchi, Jharkhand 17 November 2016 :: Opposition legislators holds a protest outside Assembly demanding for the implementation of the CNT SPT Act during first day of winter session at Jharkhand Assembly in Ranchi on Thursday. Photo-Ratan Lal

These Opposition leaders held protest outside Assembly demanding implementation of the CNT SPT Act during first day of the winter session at Jharkhand Assembly.
Inside the Assembly,Jharkhand Chief Minister Raghubar Das together with his Cabinet Ministers took part in the Assembly proceedings.