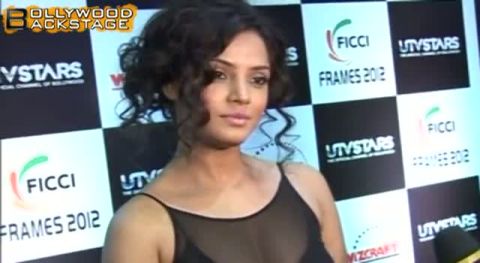 The tip top guys who watched the India-New Zealand 4th ODI inside Jharkhand State Cricket Association’s International Stadium in Ranchi on Wednesday were hundreds of men,women and children.

Among them was princess of Bihar and Bollywood actress Neetu Chandra.Making her presence public,she,who was invited by JSCA President Amitabh Choudhary had put up her picture on her Twitter account.

Neetu Chandra,according to wikipedia,is a famous producer and theatre artist.She is also an established classical dancer and an active sportsperson,involved in the promotion of basketball and India through her close association with national Basketball Association and Taekwondo,being a forth Dan Blackbelt.

More,she has her own production house called Champaran talkies winning the National Award for the film Mithila Makhaan.

The 45000 capacity stadium was packed.The security was tight as nearly 900 police personnel were deployed to maintain law and order.

Most hotels in Ranchi were booked till Thursday afternoon.Nitu Chandra told www.jharkhandstatenews.com that she who hailed from Bihar was enjoying in Ranchi.”It is a nice place to watch cricket”,she said.