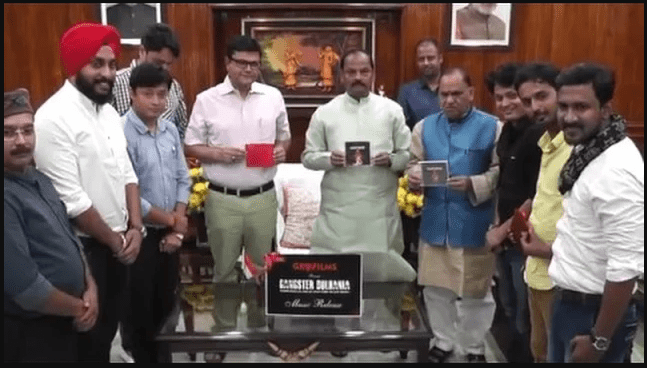 The inaugural function attended among others by Minister C.P.Singh and Principal Secretary to CM Sanjay Kumar marked the beginning of Gangester Dulhania's shooting in different towns of Jharkhand.

Incidentally,the name of the movie-Gangster Dulhania- is based on the story of a girl who becomes a .gangster.The story introduces Gangwar's corporate appearance.

This is going to be made under the banner of GR8 Films.Its top man and Producer is Kumar Vivek and its Director is Saurabh Suman.In this Bhojpuri film Gaurav Jha, Nidhi Jha, Glory Mohanta and Sanjay Pandey, besides local artist from Jamshedpur are going to get their acting exposed.

In all,nearly 50 actors were involved in it and a team of 40 crew is going to take part in shooting of this Bhojpuri film.

Young director Saurabh Suman Jha has said that he had been working on the story of the film with producer Kumar Vivek for many years.

The film's composer Aman Shlok is on record stating that songs of 'Gangster Dulhania' are also far away from the common Bhojpuri films.These were being made keeping in mind the story and scenes of the film.

The producer of the Bhojpuri film made in Jharkhand is planned to be shown in 200 cinema houses of Jharkhand,Bihar,Uttar Pradesh,West Bengal,Odhisa and Maharashtra.