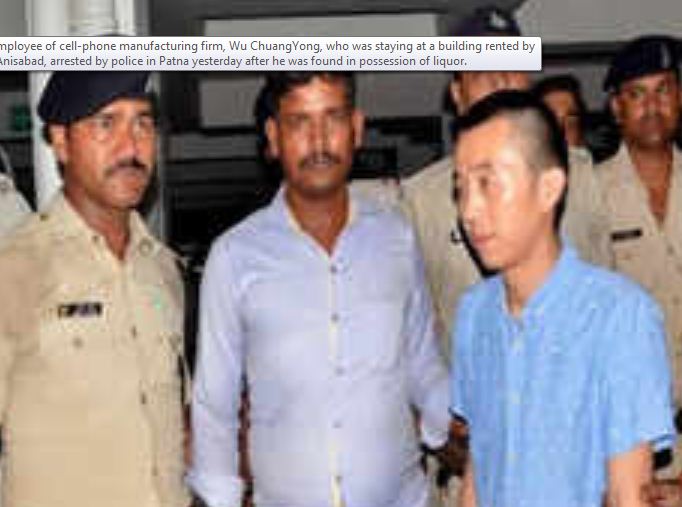 *Picture shows Chinese national Tiandong who was arrested by the police in Patna.

Alcohol may be a man's enemy,but Bible says love the enemy.So appear to be the mindset of two Chinese nationals who were charged with violation of prohibition laws enforced by Chief Minister Nitish Kumar Government in Bihar.

Among the two Chinese nationals,one identified as Tiandong was arrested from a guest house of a Chinese cellphone manufacturing firm located at Alinagar under Gardanibagh police station in Patna on late Sunday evening.

The arrest of these Chinese nationals was criticised by a Chinese national in New Delhi."This is a stupid act.We condemn it and think if this kind of law prevails,Bihar can not develop.No body will come to do business there",said a staff of the China Embassy in New Delhi.

However,in Patna,the cops called him on his cellphone to get reply from  Wu Chuangyong that he would return to Patna soon,” the SSP said.Wu was reportedly in  Bhagalpur or Begusarai district of Bihar.