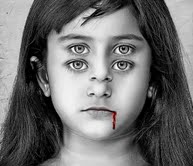 “If blatantly copying films was not enough, filmmakers these days are even copying their films’ posters from elsewhere. Recently, the poster of Ram Gopal Varma’s upcoming horror film caught our eye and we couldn’t help but notice that we had seen a similar image somewhere else as well!”,said Midday today.

Intestetingly,Verma’s poster shows a girl with four eyes,hinting at supernatural powers.” The poster seems to be a rip-off from a print advertisement by a Mumbai-based alcohol company who had this campaign designed to spread awareness against drunken driving.”

In fact,the booze company’s message is that when you are high,you tend to see multiple images of the same object after drinking too much.It is likely Verma liked the idea and copied it.