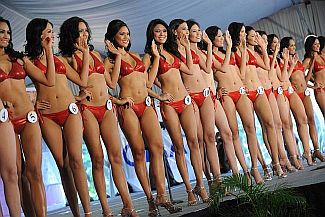 The organizer of Miss World 2013 Beauty Pageant has declared that biknis will not be worn by the contestants amid protests launched by hard line Muslim groups in Indonesia.

Rajawali Citra Televisi Indonesia,the official broadcaster and organizer of Miss World 2013 in Indonesia is reported to have declared that, “There will be no bikini in this year’s Miss World pageant to respect our traditional customs and values. This is a sensitive issue in Indonesia. We have discussed it since last year and they have agreed.”