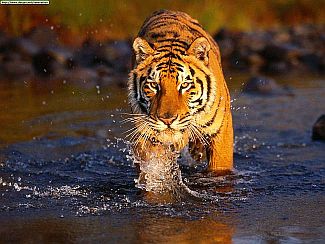 Reports say the serial is not only for animal lovers but also for all those who take pride in being Indian and stand for the cause of conservation of tigers across the globe.

In his exclusive report on it,MID Day’s Dhiman Chattopadhyay in his story writes that “The first section talks about how over the centuries this majestic wild cat has been relentlessly hunted by maharajas, the British during colonial rule and professional hunters. The narrative comes from the voice of Jim Corbett (or rather the actor who masquerades as the great 19th century conservationist), and takes viewers through the fascinating story of his own life, of how he made the transition from a man who shot dead several tigers to one who spent the better part of his life in India shooting the big cat with his camera and working to preserve the animal’s natural habitat.

Simultaneously a narrative enlightens viewers about how India today has less than 3,000 tigers, compared to nearly 40,000 that roamed our forests when Jim Corbett was hunting (and helping save) the tiger!”

The second part,adds Chattopadhyay,was shot mainly in the reserve forests of Bandhavgarh.”As the camera trails a mother and her three cubs, the supporting narrative explains how tigers live, learn to adapt to their surroundings and fight for territory. It would be cruel to disclose everything, for that would spoil the fun. But trust us, we watched the preview DVD, which lasted well over an hour — at one go, without pressing the pause button even once! I am not particularly in awe of the tiger and admittedly as much an armchair conservationist as most Indians are. Which is precisely why it is highly recommended that you watch this fascinating series. It may just force you to get off thatarmchair and do something to save this wonderful beast from extinction.

It could mean writing a cheque for tiger conservation, adopting a cub (no you don’t have to bring it home), or raise awareness against poaching (yes, tell your pals who show off those tiger skin bags or coats to feel ashamed). As a page from the diary of Jim Corbett reminds us right at the beginning of the documentary: “The tiger is the noblest citizen of India. India is the kingdom of tigers.”

Further Chattopadhya says that “Angela Barlow, Eric Mayers and Colin Vint do a wonderful job with the narrations. The camera work is brilliant, as one has come to expect over the years from the Animal Planet team and even Bipasha Basu, Ajay Devgn and Abhinav Bindra — the celebrities roped in to talk about tiger conservation — do a neat job. If the DVD is anything to go by, watching the show on TV will be a much better use of prime time than gaping at over-dressed bahus or trying to make sense of news anchors who need decibel control.”