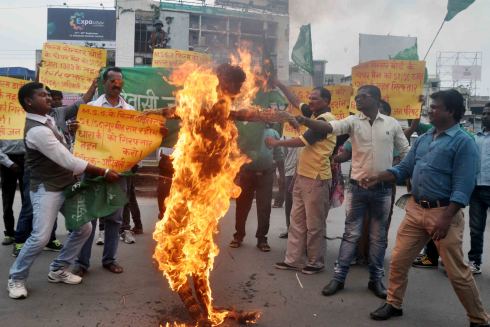 “It is a terrible film showing a false reality”,said an agitator who was a tribal student echoing the sentiments of many people.They protested against this film at the town centre in Ranchi at Albert Ekka Chowk.

Apart from acting and directing, Gurmeet composed and sang all the songs, worked as lyricist, script writer, cinematographer and editor respectively and was seen only by him. The film was released worldwide on Friday 13 February 2015, in Hindi, English, Tamil, Telugu and Malayalam. The film has received negative reviews from critics.

Incidentally,the film performed badly at the Box Office although its producers claimed it performed well. A sequel, MSG-2:The Messenger,was announced on August 18 and was released on September 18.

The Messenger action film director Gurmeet Ram Rahim Singh during a protest against this movie in Ranchi on Saturday.