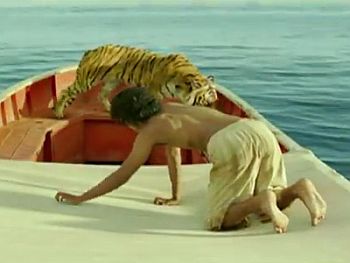 In 2001 he had authored a novel-Life of Pi.Today,Yann Martel’s story can be seen in the form of an upcoming 3D adventure film -Life of Pi.

Directed by Ang Lee (who is credited to have made Brokeback Mountain, Crouching Tiger and Hidden Dragon),this film is about a young man who was on a fateful voyage on a boat in the sea.

This man faces a disaster in the sea.Yet he continued his journey of adventure and discovery.

At one point,this man gets flooded with water on a lifeboat he shared with his only companion,a Royal Bengal Tiger with whom he had established a relationship.This strikes a chord with the viewer who gets amazed seeing the undomesticable tiger having a relationship with him.

The movie aims to attract young audience who crave for adventure.