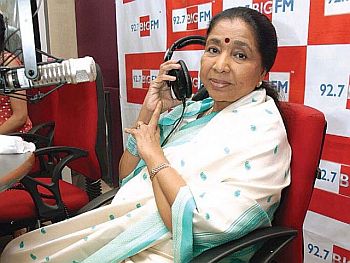 The veteran singer Asha Bhosle has made an acting debut at 79.She is playing the role of an aging,ailing mother in the film-Mai.

Mai,directed by Mahesh Kodiyal with cast such as Bhosle,Padmini Kolhapuri and Ram Kapoor,is based on an old issue of parents being left in the lurch by their off springs.But unlike Baghban and Avtar,Mai tries to strike emotional connect on two aspects.

It picks up the singer to suit her age and play the role of mother who her children consider a burden. But its story is a common tale and happens in almost every family.

”Juxtaposing scene after scene of Mai’s memory lapses along with her children’s woes constitutes the storyline. Only one of Mai’s daughters Madhu (Padmini Kolhapure) shows concern for the old mother. Madhu’s hubby Subhash (Ram Kapoor) however wonders if that’s the reason she insisted on a 2BHK so that she could house her mom too!”

“While Mai’s other daughter, who stays in a 1BHK, has no space even for a fly leave along Mai! One son-in-law wonders more about his incoming and outgoing calls than worrying about Mai, while the granddaughter feels she has lost it! Apart from Asha, the rest of the cast seem to be going through their stereotyped roles of being either good or bad.

Watch the film only for the singer-turned-actor AB”,suggests a review by Shaheen Parkar in Mid Day.