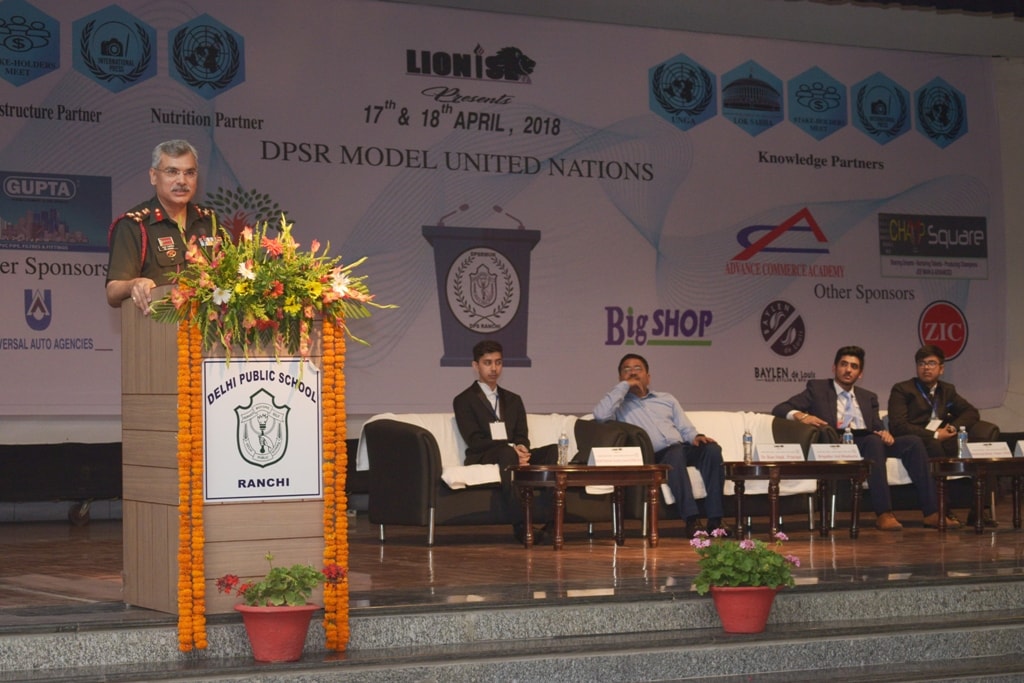 DPS Ranchi always believes in putting its effort to do something new for its students to groom extraordinary skills among them so that they can face life with courage and confidence. With this objective, DPS Ranchi conducted Model UN Conference in Ranchi at its premises on 17th April 2018. MUN is a new concept in Jharkhand and DPS Ranchi believes that such an event is certain to ignite the young brains of the school and prospects of the future of the students by way of developing problem-solving skills and behaving as diplomats.

The chief Guest of the Opening day of the conference was Brigadier Atul Bhadauria who happens to be the alumnus of the prestigious National Defence Academy Pune and The Indian Military academy Dehradun.He was commissioned into the Regiment of Artillery on 14th December 1991. Brigadier Bhadauria is presently commanding an Artillery Brigade in Dipatoli in Ranchi.

The opening ceremony started with welcoming the Chief Guest and then lighting of the lamp. Further the school Principal Dr. Ram Singh was invited at the stage by the Organizing Council members and to give his speech on MUN and Dr. Singh thanked the Organising Council members for initiating such an innovative event first time ever in Ranchi and said that students by participating in such an event learn leadership skills, organizing skills and come to know about the reality of life as well.

Proceeding further the Chief Guest of the Ceremony was invited to present his opinion on the Conference and Brigadier Atul Bhadauria acknowledged the efforts made by DPS Ranchi to initiate such a type of Conference at its premises and congratulated Dr Ram Singh for being so energetic to pursue innovations which are unique on its own and said that such type of efforts by the school will definitely uplift the standard of student’s life and said that every student should keep his/her mind open all the time and make contributions towards society.

The intra- MUN conference involves students of DPS Ranchi only who have been divided into various committees. The committees are namely  The Lok Sabha, The Stakeholders Meet, United Nations General Assembly, Historic Crisis Committee, International Press. Each committee will hold debate which will enhance the spoken skills among the students and eliminate the fear factor to speak in public. Each Committee has been allotted to individual judges who will monitor the proceedings of the debate and will maintain order during the debate session.

This debate competition will continue on 18th April as well and finally, the winners will be given certification which is globally recognized.

The students enjoyed the first day of the event very much and gave feedback that the conference helped them in many ways like it enhanced their confidence level and a further increase in their knowledge. Students were really happy to participate in the event as they had an opportunity to have spontaneous interaction during the debate.