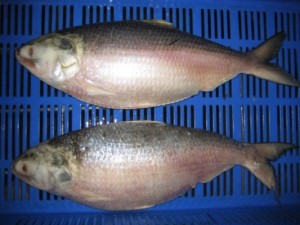 A study shows that nutritional composition of Hilsa,a premium price and highly sought after fish,under goes change during migration from one water to another water.The study –Changes in the nutritional profile of Hilsa Shad,Tenualosa(Hamilton,1822) during Anadromous migration from Bay of Bengal to the river Godavari-conducted by B. Madhusudana Rao, L. N. Murthy, Suseela Mathew, K. K. Asha, T. V. Sankaan and M. M. Prasad,found that nutritional composition of Godavari Hilsa changes during its migration and the Hilsa from River Godavari appears to be better than marine Hilsa of Bay of Bengal.

The protein content was slightly higher in marine Hilsa(22.69%).The study noted;”.”Wide variation in fat content of Hilsa was observed during its anadromous migration. The fat content in the marine Hilsa was12.4% which increased in brackish water habitat to 17.3% and progressively decreased in river habitat (14.51 to 8.78%).