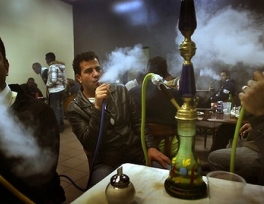 The idea that hookah smoking is somehow less harmful than cigarettes is a dangerous misperception, scientists say.

Hookah or water pipe use continues to rise among Canadian youth despite declines in the number of youths who smoke cigarettes, a new study has found.

The study from the University of Waterloo found that almost one in four high school seniors try smoking hookah.

The study estimates that more than 78,200 youth are current water pipe users.

“While we can celebrate a continued slow decline in cigarette use across the country, water pipes are bucking the trend,” said Leia Minaker, from the University of Waterloo, who conducted the study.

Water pipes work by bubbling tobacco smoke through water, leading many users to believe that they carry less risk than cigarettes.

The study, which analysed data from the national 2012-2013 Youth Smoking Survey, found that over a third of youth believe it is less harmful to smoke tobacco in a water pipe than smoking a cigarette.

“The idea that water pipes are somehow less harmful than cigarettes is a dangerous misperception,” said Minaker.

“Since most water pipe smoking sessions last much longer than a cigarette, water pipe smokers may absorb higher concentrations of the same toxins as in cigarette smoke,” said Minaker.

Water pipes join a growing number of products marketed to youth using flavoured tobacco. The survey found that among students who reported using water pipes, about half used flavoured products.

“The tobacco industry continues to add candy, fruit and other flavours to tobacco products to attract young people. Restricting flavours in tobacco products is an important part of a comprehensive tobacco control strategy,” Minaker said.

The study also found that water pipe use increases significantly by grade, with boys more likely than girls to try hookah during their high school years.

Youth with higher amounts of weekly spending money have significantly higher odds of using water pipes. About 14 per cent of grades 9 to 12 students in Canada have tried water pipes, up from 10 per cent in 2010, researchers said.

The study was published in the journal Cancer Causes and Control.