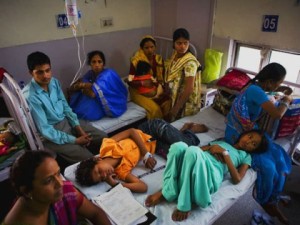 India has made great strides in reducing both child and adult mortality since 1990, according to a new study that found adults and children in the country are living longer and healthier lives than two decades ago.

The first-ever journal publication of country-specific cause-of-death data for 188 countries found people are living much longer worldwide than they were two decades earlier, as death rates from infectious diseases and cardiovascular disease have fallen.

Given the size of India’s population in particular, and projections that it may soon become the world’s most populous country, mortality trends there have global implications, researchers said.
In 2013, India accounted for 19 per cent, or 10.2 million, of the world’s deaths. The country has made great strides in reducing both child and adult mortality since 1990.

“It’s very encouraging that adults and children in India are living longer and healthier lives,” said Dr Jeemon Panniyammakal of the Public Health Foundation of India and a co-author of the study published in The Lancet.