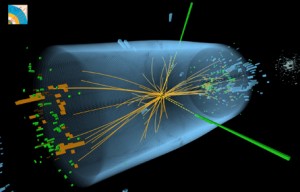 IN JULY, physicists found the long sought and the elusive Higgs Boson. Commonly known as the God Particle, it is a sub-atomic particle that is 133 times heavier than a proton and essentially answers the biggest mystery in Physics, “What gives matter mass?”

The existence of the Higgs Boson was found in the 1960s when certain particles that were unaccounted for came up in mathematical calculations. It was named after Peter Higgs who suggested the probability of its existence.

According to Wikipedia, a ‘boson’ is a type of particle that allows multiple identical particles to exist in the same quantum state in the same place. The existence of the Higgs Boson was found in the 1960s when certain particles that were unaccounted for came up in mathematical calculations.

A WSU Physics Prof, Nick Solomy explaining the significance of this discovery for the general people, said “An energy field that permeated through the early universe after the Big Bang (and is present even today) is the field that resists the motion of particles when they move through it. It is this resistance to motion that gives the particle its mass.”

Therefore, the discovery of the Higgs Boson proved the existence of the Higgs field which is just like an EM field and we supposedly pass through it all the time. This energy field gives us our ‘mass’ and the Higgs Boson is a particle created by it. This particle is elusive because it does not exist at all times and needs special conditions and has specific energy requirements in order to be created.

According to Solomy, this Higgs Boson interacts with the proposed Higgs field to create all the particles that we see around us and hence creates normal matter. Like we can control magnetic and electromagnetic interactions, Solomy wonders if it will also be possible to control the interaction of mass.

Seen in the picture is a computer visualization.It depicts one array of particle debris that physicists would expect from the decay of the Higgs boson in the Large Hadron Collider, the world’s largest particle accelerator. After years of effort, officials at the European laboratory CERN report that the Higgs apparently exists and has characteristics in line with the standard model of particle physics. Credit: © 2012 CERN.