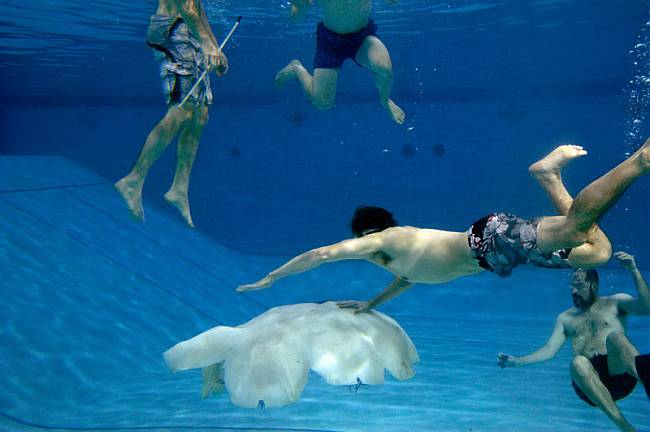 With an aim to do surveillance and monitoring the environment, in addition to other uses such as studying aquatic life, mapping ocean floors, and monitoring ocean currents,an autonomous robotic jellyfish has been created in the US.

The creators are Virginia Tech College of Engineering researchers.They have come up with a life-like, autonomous robotic jellyfish the size and weight of a grown man, 5 foot 7 inches in length and weighing 170 pounds,according to the Science Daily’s report- Large Robotic Jellyfish Could One Day Patrol Oceans.

The same report states that the prototype robot, nicknamed Cyro, is a larger model of a robotic jellyfish the same team — headed by Shashank Priya of Blacksburg, Va., and professor of mechanical engineering at Virginia Tech — unveiled in 2012.”The earlier robot, dubbed RoboJelly, is roughly the size of a man’s hand, and typical of jellyfish found along beaches”,said the report.

The report quotes Alex Villanueva of St-Jacques, New-Brunswick, Canada, and a doctoral student in mechanical engineering working under Priya,saying :”A larger vehicle will allow for more payload, longer duration and longer range of operation.”

“Biological and engineering results show that larger vehicles have a lower cost of transport, which is a metric used to determine how much energy is spent for traveling.”

Further the report says:”Both robots are part of a multi-university, nationwide $5 million project funded by U.S. Naval Undersea Warfare Center and the Office of Naval Research. The goal is to place self-powering, autonomous machines in waters for the purposes of surveillance and monitoring the environment, in addition to other uses such as studying aquatic life, mapping ocean floors, and monitoring ocean currents.”