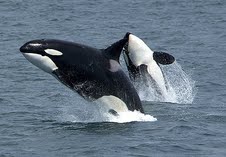 The world’s most trusted science journal-Science Daily-has come up with an article- “Long Menopause Allows Killer Whales to Care for Adult Sons”-in its September 13 edition,providing answer to why female whales have the longest menopause of any non –human species-to care for their adult sons.

This seminal finding,part of research led by the Universities of Exter and York,was elaborated by its conclusion that “for a whale male over 30,the death of his mother means an almost 14-fold-increase in the likelihood of his death within the following year.”

The Science Daily’s report admits that “the reason for the menopause remains one of nature’s great mysteries and very few species have a prolonged period of their lifespan when they no longer reproduce, as in humans.

However, female killer whales stop reproducing in their 30s-40s, but can survive into their 90s. While different theories have been put forward for the evolution of menopause in humans, including the well-established ‘grandmother’ hypothesis, there has been no definitive answer to why females of a small number of other species, including killer whales, also stop reproducing part-way through their lives.”

The research team comprised scientists from the Universities of Exeter and York (UK), the Center for Whale Research (USA) and Pacific Biological Station (Canada) analysed records spanning 36 years, of the members of two populations of killer whales (Orcinus orca) in the North Pacific ocean, off the coast of the USA and Canada.

“They found that the presence of a female who was no longer reproducing significantly increased her older offspring’s survival. In the case of males over the age of 30, a mother’s death meant a 14-fold increase in the likelihood of their death within a year. Females also stay within their mother’s group but for daughters of the same age, the difference is just under three-fold. For females under the age of 30, the death of their mothers had no effect on their survival rates,”said the article.

“Killer whales live in unusual social groups, with sons and daughters staying with their mothers in a single group throughout their lives. With this close association, older mothers have the opportunity to increase the transmission of their genes by helping their adult offspring survive and reproduce. When sons mate, their offspring are cared for by females in another group, whereas when daughters reproduce the offspring stay in the group, which increases local competition for resources within the group.”