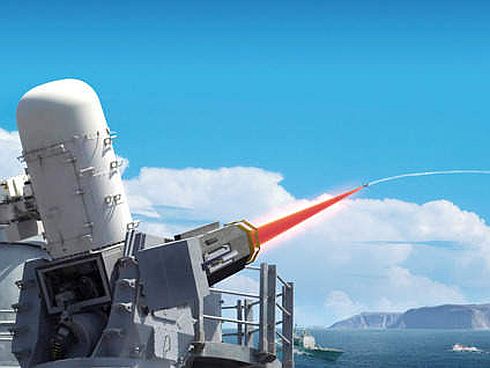 In the arms bazar,another brand has arrived.This is laser weapon.

According to New York Times,the U.S. Navy is going to deploy for the first time a laser weapon on its ship that has been shown in tests to disable patrol boats and blind or destroy surveillance drones.

“A prototype shipboard laser will be deployed on a converted amphibious transport and docking ship in the Persian Gulf, where Iranian fast-attack boats have approached American warships and where the government in Tehran is building remotely piloted aircraft carrying surveillance pods”,reports TYehran Times.

“The laser will not be operational until next year, but the announcement on Monday by Adm. Jonathan W. Greenert, the chief of naval operations, seemed meant as a warning to Iran not to step up activity in the Persian Gulf in the next few months if tensions increase because of sanctions and the impasse in negotiations over the Iranian nuclear program. The Navy released video and still images of the laser weapon burning through a drone during a test firing”,said the Tehran Times.

It adds:“The laser is designed to carry out a graduated scale of missions, from burning through a fast-attack boat or a drone to producing a nonlethal burst to “dazzle” an adversary’s sensors and render them useless without causing any other physical damage.

U.S. Navy officials acknowledge that the first prototype weapon to be deployed is not powerful enough to take on jet fighters or missiles on their approach.

Rear Adm. Matthew L. Klunder, the chief of naval research, said the high-energy laser system was developed as part of the Navy’s search for “new, innovative, disruptive technologies.” In essence, the Navy is trying to harness technological advances in battling adversaries that are thinking of inventive ways to counter American power.

Admiral Klunder said the weapon had destroyed targets in all 12 of its field tests.”