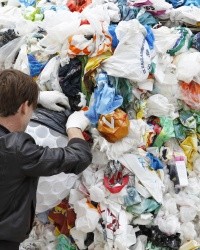 A plastic-degrading species of fungus, Pestalotiopsis microspora, was found in the Ecuadorian Amazon by a group of students and professors from Yale University.

This fungus is pathogenic to many varieties of plants and causes disease and rot. But it is also found to be able to degrade the common plastic ‘Polyurethane’ (PUR) and utilize this synthetic polymer as the sole carbon source for its sustenance.

This organism can also thrive in an oxygen-free environment and can still degrade the PUR. Therefore, the use of this fungus can be viable in combatting the ever-mounting solid waste problem of which a major part is ‘Polyurethane’.

The findings, by the group studying the organism, were published in the article, “Biodegradation of Polyester Polyurethane by Endophytic Fungi”. The article describes how the fungus utilizes the polyurethane as a carbon source and is able to survive in an anaerobic condition which means that it does not require the available atmospheric oxygen for its survival.

It was also shown that the Polyurethane was biodegraded by the hydrolysis of its constituent esters by a serine hydrolase enzyme secreted by the fungus. Since the article does not mention the by-products of the anaerobic respiration by the fungus, some might argue that the organism might produce large quantities of Methane and Carbon dioxide gases when it metabolizes PUR’s carbon by degrading the plastic.

If it so happens, then we would simply be converting our solid waste into gaseous products that further global warming since methane and carbon dioxide are greenhouse gases. Since waste in its solid form does not add free atmospheric carbon; the implications of the use of this organism has to be studied with extreme care. For now, this fungus seems to be promising as an agent for bioremediation in the future.