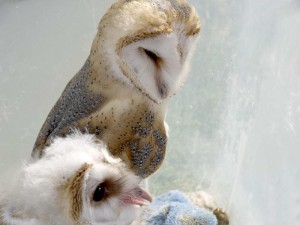 Pic courtesy Science Daily saying this :”As they get older, baby owls change their sleeping patterns. The older they get, the less time they spent in REM sleep. (Credit: © quasarphotos / Fotolia”)

Science Daily has published an article listing a fine conclusion of a seminal research on sleep patterns among baby birds and mammals.

The article says:“ Baby birds have sleep patterns similar to baby mammals, and their sleep changes in the same way when growing up. “

In fact this is the finding of a team of orinthologists  from the Max Planck Institute for Ornithology and the University of Lausanne.

The article says what  these orinthologists  found out working with barn owls in the wild.

“The team also discovered that this change in sleep was strongly correlated with the expression of a gene involved in producing dark, melanic feather spots, a trait known to covary with behavioral and physiological traits in adult owls. These findings raise the intriguing possibility that sleep-related developmental processes in the brain contribute to the link between melanism and other traits observed in adult barn owls and other animals’,said the Science Daily article.

It further added:”Sleep in mammals and birds consists of two phases, REM sleep (“Rapid Eye Movement Sleep”) and non-REM sleep. We experience our most vivid dreams during REM sleep, a paradoxical state characterized by awake-like brain activity. Despite extensive research, REM sleep’s purpose remains a mystery. One of the most salient features of REM sleep is its preponderance early in life. A variety of mammals spend far more time in REM sleep during early life than when they are adults. For example, as newborns, half of our time asleep is spent in REM sleep, whereas last night REM sleep probably encompassed only 20-25% percent of your time snoozing.”

To know further read the article in www.sciencedaily.com