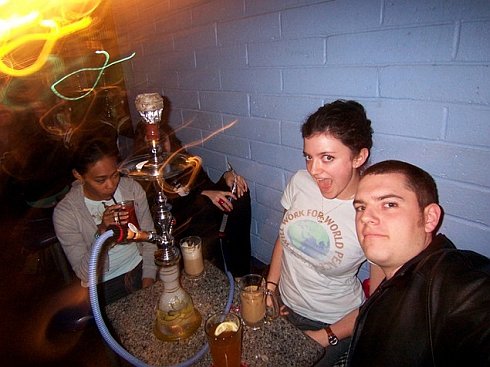 Nirmal Purty,a 21- year old student doing MBA course at the Ranchi University,smoked a hookah at a party. He liked the exotic water pipe so much that he bought a hookah for himself and kept it in his hostel room.

Like many other students who are embracing hookahs on campuses across India,there is a belief that hookah smoke is less dangerous than cigarette smoke because it “is filtered through water, so you get fewer solid particles.”

“Just think for a while. I don’t do it that often.I smoke once a month if that, I’m not really concerned with the health effects,” says Purty.

But in fact, hookahs are far from safe.This is established now by research,says Nathan Seppa in sciencenews.org.”The tobacco and fruit mixture smoked in public hookah bars might be considerably more dangerous than its pleasant scent would suggest. An analysis of people who smoked from water pipes three times a day finds that the pipes deliver more carbon monoxide and benzene, a carcinogen, than does smoking half a pack of cigarettes daily”,says the story in Science News.

In an upcoming issue of Cancer Epidemiology, Biomarkers & Prevention, researchers document those and several other cancer-causing compounds that showed up in urine tests of the water-pipe smokers. The research calls into question a common assumption: that hookahs are safe.

“This is a great addition to the literature,” says Thomas Eissenberg, a psychologist at Virginia Commonwealth University in Richmond. He and his colleagues had previously found toxic substances in hookah smoke. The new paper extends his findings by detecting carcinogens and other bad actors in water-pipe smokers themselves, he says.

Hookah smoking goes back hundreds of years in India, the Middle East and North Africa, but it is newer in parts of Europe and North America. The substances heated in a hookah vary. In the study, researchers used pastes chosen by the participants that were 5 to 10 percent tobacco combined with honey, molasses and bits of fruit. This paste goes in the bowl of the pipe, which is covered with a perforated piece of aluminum foil and topped with a burning piece of charcoal, says study coauthor Peyton Jacob III, a research chemist at the University of California, San Francisco. The smoker then inhales.