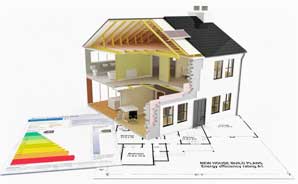 While most entrepreneurs in the green energy field are looking for ways to supply more energy, Jim Conlon of Elysian Energy in Maryland is focusing on making use of the energy that’s slipping through the cracks. Literally.

Elysian Energy looks at how homes use energy and what homeowners can do to get the most for the money they are spending to heat, light and cool. Conlon adapted an academic background in ecosystem management and conservation biology to an entrepreneurial venture after becoming interested in renewable energy. An internship at the American Council
On Renewable Energy inspired him to think, “Let’s not wait around for nonprofits to figure this out. Let’s let the market decide, and let’s get competitive and innovative.”

Conlon’s instincts were well-founded. Glenn Croston, author of “75 Green Businesses You Can Start to Make Money and Make A Difference,” cites a U.S. Department of Commerce report estimating the green economy in 2010 to have been between $350 billion and $500 billion of business activity. “It’s a huge opportunity, and it’s not going away.”

Conlon started Elysian Energy in 2007 with the mission “to provide actionable and cost-effective energy information,” he says. “We tell people how to save money on their bills and how to make their home more comfortable. An efficient building tends to be safer, more comfortable and cheaper to live in.” Instead of focusing on energy creation, Conlon concentrates on finding out how the existing living systems could be made more efficient. “That’s far smarter money than buying solar panels or building a wind farm. Efficiency, what we call ‘negawatts,’ is far cheaper overall than renewable energy at this point. The energy saved is power or energy you don’t need to buy or install,” he says.

One of his first clients was a couple he describes as “very prudent consumers of information. I was there to confirm for them that replacing all their windows was smart money,” Conlon says. “When I crunched the numbers, did the diagnostics, what I found was that the windows would not have paid back within 100 years.” But did he tell them how they could save money? “The far less glamorous but practical things for them to do were a lot of caulk, spray foam, weather stripping and adding some insulation.”

Keren Waranch of Silver Spring, Maryland, was considering replacing her aging heating and air-conditioning systems in 2011 because they couldn’t keep the second floor of her home warm in winter and cool in summer. But first she signed up for an inspection with Elysian through her local power company. “I wanted to see if there was really another problem in the house.” Instead of replacing the heating and cooling systems, she added insulation and had the windows properly sealed. “Last summer it was unbearable,” she says of her upstairs. “This has been the hottest July, and it’s been fine.”

Hannah Schardt knew the windows in her Washington row house were crumbling, but found out during Elysian’s inspection that there were many other steps she could take while saving to replace them. “He told us we were a D—as far as energy efficiency. The best thing about it was that he gave us some really cheap, easy fixes like putting in a brush along the bottom of the door because that was one of our biggest heat-loss areas.”

Since 2007, Conlon says, “we’ve grown over 100 percent every year. We’ve been in over 10,000 homes.” His 25 energy inspectors are certified by the Residential Energy Services Network and the Building Performance Institute. As Elysian Energy has grown, so has the energy auditing business around it. “Four years ago when I started my company, I wasn’t the new kid on the block; I was effectively the only kid on the block. Today I’m going to be on a call that’s probably going to have 40 or 50 companies on it.”

Increased efficiency can also allow energy providers to expand their businesses more cost-effectively. “It’s a lot cheaper to meet new demand by tightening up your current demand’s efficiency,” Conlon says. “If you lower [an area’s] gross annual consumption and you already have that capacity, that’s new capacity for someone else. That’s far cheaper than trying to get permitted and trying to put up a new power plant.”

“The most successful entrepreneurs,” author Croston says, “reject the idea that we can either have a clean planet or a healthy economy but we can’t have both. They say, ‘We can have both, we need to have both and I’m going to show you how we can do both.’ ”