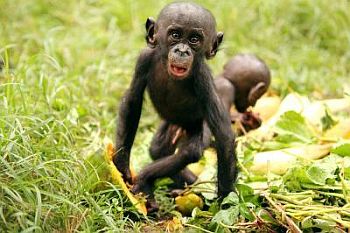 The Science Daily has come up with yet another seminal research on behavioural pattern of the Congo’s apes called Bonobos.

The story raises a question –what will you do when you stand in line somewhere and decide to open a pack of gum.Will you share a piece with the co-worker standing to one side of you, or with the stranger on the other?

“Most humans would choose the person they know first, if they shared at all”,states the Science Daily story adding that Bonobos prefer to share with a stranger before sharing with an animal they know. In fact, a bonobo will invite a stranger to share a snack while leaving an acquaintance watching helplessly from behind a barrier.”

The Science Daily’s story is based on a research published in January 2,2013 edition of PLOS ONE.”It seems kind of crazy to us, but bonobos prefer to share with strangers,” said the report quoting Brian Hare, a professor of evolutionary anthropology at Duke University. “They’re trying to extend their social network.” And they apparently value that more than maintaining the friendships they already have.”

“To measure this willingness to share, Hare and graduate student Jingzhi Tan ran a series of experiments with bonobos living in the Lola ya Bonobo sanctuary in Kinshasa, Democratic Republic of Congo.”