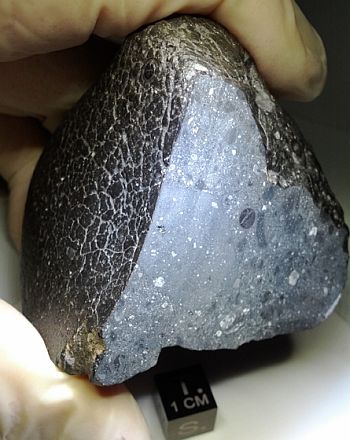 This story by Tanya Lewis is an eye opener for any body who wants to know about the NASA’s Mars Mission and its achievement.

It is slated to be published in ScienceNews.org’s print edition on January 26,2013.

A recently found Martian meteorite contains substantially more water than any previously found, and chemically the rock appears to be in a class by itself.

The meteorite, known as Northwest Africa 7034, formed about 2.1 billion years ago during Mars’ Amazonian epoch and closely matches the chemical composition of parts of the planet’s surface, scientists report online January 3 inScience.

“This new meteorite is more like Martian crust than any previous meteorite,” says lead author Carl Agee, a planetary scientist at the University of New Mexico in Albuquerque.

Specifically, NWA 7034 resembles crust in regions on Mars examined by orbiters and rovers — including rocks and soil found inside Gusev Crater by NASA’s Spirit rover. Most other Martian meteorites are a poor match for the observed regions and may come from elsewhere on the surface or deeper down.

Because of its age, the meteorite could represent a link between the warm, wet Mars that existed long ago and the cold, dry Mars that exists today, Agee says.

Because no one has been able to bring rocks from Mars back to Earth to study, meteorites are the next best thing. So far, 110 Martian meteorites have been identified on Earth (although some may be fragments of the same rocks). All but one other have been part of what’s known as the Shergottite,Nakhlite and Chassignite group, named for the locations where the first of each type of meteorite was discovered. NWA 7034 has a few similarities to the SNCs. But it differs dramatically in many other respects, representing a new class of Martian meteorite, Agee says.

The rock, found in 2011 in the Moroccan desert, formed during a volcanic eruption on Mars’ surface, chemical analysis shows. It appears the lava fragmented into pieces that fused back together, reacting with nearby water. “We just don’t see anything like that in the SNC meteorites,” Agee says. “This new meteorite is showing us that Mars is diverse in its makeup.”

The amount of water contained in the rock is about 6,000 parts per million — more than 10 times the amount of water in most SNCs. The water may have come from permafrost (permanently frozen soil) that melted during the eruption, or possibly from liquid water on Mars’ surface, Agee suggests.

To measure its water content, scientists placed the rock in an oven and heated it in stages. They also heated the sample in a vacuum and measured the different forms of hydrogen in the water vapor that formed. These results suggest the water came from Mars, the authors say.

That finding helps address a concern that the meteorite could have been contaminated by water after it landed. “It’s been on Earth a very long time,” says meteoriticist Derek Sears of the NASA Ames Research Center at Moffett Field, Calif, “but it doesn’t look like terrestrial water.”

The new rock helps fills a time gap in the Martian meteorite record, says planetary scientist Harry McSween Jr. of the University of Tennessee, Knoxville. Compared with other meteorites, “it has had a more protracted, fascinating history that is going to take some time to unravel,” he says.

Courtsey with pic ScienceNews.org saying:‘The Martian meteorite known as Northwest Africa 7034 is the first of its kind, containing large amounts of water and signs of volcanic Martian crust.Credit: C. Agee/Univ. of New Mexico’