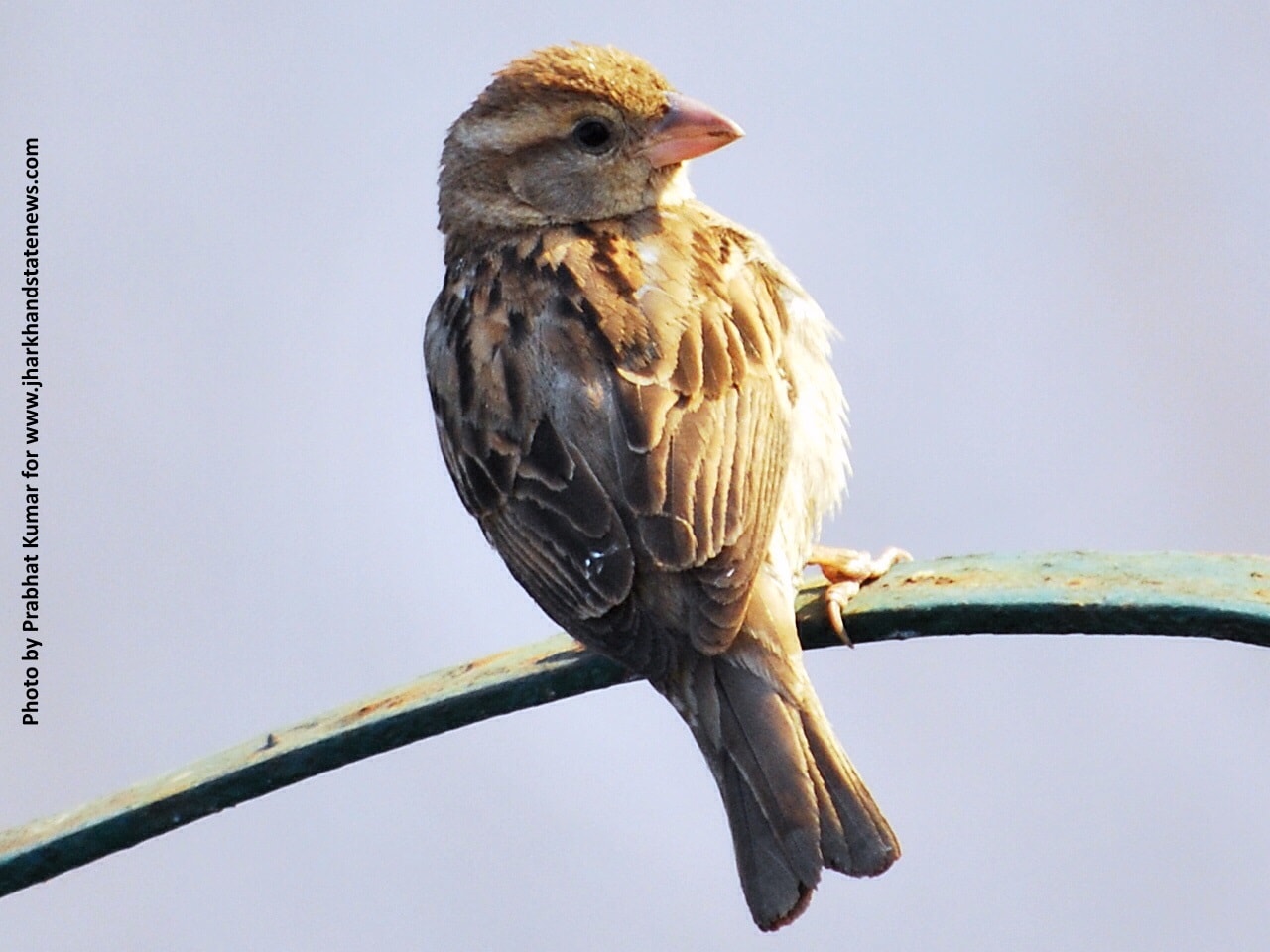 Believe it or not sparrows are capable to convey ‘Thanks’.They thank when they get love and reciprocate when humans feed them.

I have experienced it in my life.More,these lovely birds live in family.Often I have seen their entire family broods before you to introduce them the way we do for our near and dear ones.

In interaction with them in my house,one question had gripped my mind:is it true that these sparrows are capable of thinking and expressing emotions?

Scientific data as well as personal experiences confirm that like other birds,these sparrows too have smart brains.They possess the same basic feelings and emotions,each in different degree in comparison to humans.I narrate one such personal incidence to substantiate my viewpoint.The fact is nearly a about decade old.

It was a pleasant morning in October. Sitting on the terrace of my house, I was leisurely enjoying the wonderful weather as I was basking in the sun after feeding my avian friends a little while ago – a habit I had picked up after my retirement.

Suddenly I heard a sound of rushing wings all round me and found to my utmost delight that a large flock of sparrows had just landed in front of me,right on the iron railings. I mentally guessed the number – they were more than twenty five - all chirping sweetly as if singing in unison in perfect harmony.

This recital continued for about fifteen seconds. Soon, I observed that the large group consisted of many chicks and their parents. I was offering seeds and rice grains to the parents since long and the number of male and female sparrows never exceeded eight – four pairs in all. But the fledgling   in the group were the new arrivals in the family who were presented before me for the first time. Overwhelmed, I rose to fetch a cup of rice grains to feed them for the broods specially, but they all flew over my head, as suddenly as they had come, bidding me a fare well good bye –an emotional one - since they never returned there after.

The parents, apparently aware of the lurking dangers of predatory birds in the area, rightly had decided that prolonged stay would be dangerous for their offspring. Later on thinking on this noble incidence, it became clear that their chorus was to convey THANKS to me and presenting their chicks was to introduce them as a formal gesture of gratitude. This is a poignant story and I often recollect the event with profound nostalgia.

House sparrows are the most common and most familiar birds known to mankind since they have been living in the neighbourhood of human settlement all over the world - inseparable from human habitation. But they abhor living in extreme climate like desert, permanent frozen zone and also vast grass land and jungles. They are our closest avian friends visiting our premises most often. In every house-hold in India - in the villages or in the cities - presence of sparrows is considered a sign of peace, prosperity and happiness, offering the most amicable company to the ladies as well as to the children  of the house. Their scientific name Passer Domesticus defines the relation aptly. One may wonder my inclination to describe the scenario of the past, in present tense, it is only to retain the ethos of the forgone era.

Though a small bird, the body of sparrow appears well formed, balanced all round, slightly plump with broad and strong beak. The wings are short, thick and strong to impart instant lift with fast forward flight. The wings beat fast. So high is the frequency that it resembles moving in circular motion like a propeller of an aircraft.

Sparrows prefer low, short, hopping flight at tree level to conserve energy. The flight pattern is fascinating.After short spurt of wings movement, the wings are closed for a fraction of a second and again the operation in sequence is started. Thus the flight results in sine wave of low amplitude. Of course it is apparent when flight is long, about 30 meters or so and attention of the observer is properly fine-tuned for the purpose. Also, sparrows do not glide in the air. The range of manoeuvres demonstrated by sparrows far out performs the modern day flying machines.

Many factors influence the body growth as well as the population density of sparrows in their habitat. Geography, climate, agriculture and food-supply, urban pattern, environmental condition and pollution, radiation, chemicals and pesticides, sociological and human behavior are some of the parameters acting in isolation or in combination that impact them drastically.

The body weight of a mature sparrow varies in the range of 24-38 gm, length 12-15 cm and span of wings, 15-21 cm. The head is prominently round and sits snugly over a thick and short neck. The male sports a broad black marking on the neck. This characteristic marking is absent on hen. The plumage is a combination of bright brown and dull grey colours with streak of black lines as if some one has painted it with rough brush markings amateurishly.

The male displays seasonal variation in colours, brightest in breeding season. This is possible by moulting – shedding of old feathers- and growing new ones in their place.  Also, the colour of the beak changes from brown to black. The hen is quite dull in appearance with no black patch around throat. In size the male is larger in comparison to the hen. The male sparrow is a gregarious bird- always chirping and twittering noisily- an expert performer in courtship dance, displaying its plumage by fluffing it attractively, holding the wings out in characteristic manner with raised tail  in front of the seemingly unimpressed hen to attract it. While in jovial mood the male sparrow may display the same dancing pattern in front of the lucky one who feed them. In the avian world, familiarity does not breed contempt but happiness.

Sparrows are restless birds while foraging outside. Always alert, agile, moving the head and eyes in search of enemies lurking near by and thus wasting much of their time and energy without being able to finish the full course of feed available to them. But they are not meek or docile and are always ready to fight with the intruders. Some times they raid the nest of other sparrows in groups. They stay at a place for food for a short time only, fearing the predator attack. They are omnivores as they relish grains, seeds as well as tiny insects. Often they catch small garden lizard, dismember it by striking it several times on hard surface laboriously before gorging it part by part.

Raising offspring is a serious concern. Nests are located in thorny bushes, thickets, cavities in trees, in walls, holes including in rain water pipes. Not very dexterous in preparing the nest, the pair stuff grass, straw and soft feathers to construct it in untidy manner. A normal clutch consists of 3- 4 eggs. The eggs are white with sprinkling of black dots. The pair incubates it and just under three weeks the brood emerges coinciding with the onset of monsoon when   food is found in abundance.

Sad thing is sparrow population is declining. And the cause is rooted in we humans. A warden of a reserve forest wanted to show me the greatest enemy of wild life that ever existed. He made me stand in front of a wall over which a curtain was hanging. I was asked to unveil the curtain and look for the enemy inside. On a large mirror I saw - myself! Very true and thought provoking!

Sparrows have enemies in cats, rats, squirrels, almost all the birds of prey and snakes.Also, among their worst enemy are humans,it seems to me.The villain Bahelia as we call in Hindi and fowler in the English, may be seen culling small birds specially, the sparrows, in the name of Bageris to unsuspecting customers in open market place. No body murmurs. Sparrows or Bageris, culling or poaching need to be condemned by society and banned by the government as soon as possible.

In any case, sparrows are intelligent birds and have learnt to modify their behaviour to adjust with the drastically altered conditions. Crevices and holes in the wall, ventilators and skylight openings, rain water open end pipe line, etc, were the most favourite places to live in.  As these slots are vanishing, sparrows quietly were forced to adapt, in order to survive, new found abodes including inside abandoned well!

Living inside a well is a novel idea – we can marvel at their ingenuity. They now also congregate near grain storage in large flock to pick up plentiful of grains with least of effort. Sparrow ingrained instinct is to live in the vicinity of human habitation while all modern anthropogenic actions have proved inimical to their survival – they have been driven and ousted from their old traditional homes. World over this phenomenon pervades resulting in drastically declining population of this beautiful birds.

My question is :when did you last hear the sweet chirping sounds of these fast vanishing sparrows? About a decade ago – perhaps?

After I was requested by a friend to do research and write on these birds,I moved around with my camera as there was not one sparrow in my house or locality in Ashok Nagar,Ranchi.Almost ten years ago,my house was packed with them.So was the house of every house of my neighbor.The scene had changed.Now,these birds no longer treat us as their friends who had become their killers by putting up mobile towers,spread chemicals in farms to produce their poisonous feed and built cemented jungles where they cann’t survive.

Yet,a couple of days back,I was on Coud 9.Reason?Along Tata road in Ranchi, opposite the famous sun temple, I was at the busy dhaba with  trees in its premises. On one of these trees, in the twilight hours, I saw a group of sparrows gathering together and making a loud chorus of chirping.As I  enjoyed watching them giggle,my camera clicked and clicked upto late evening. The sight and sound prevailed for hours – an experience to cherish for long solely because these lovely sparrows were on the verge of extinction.