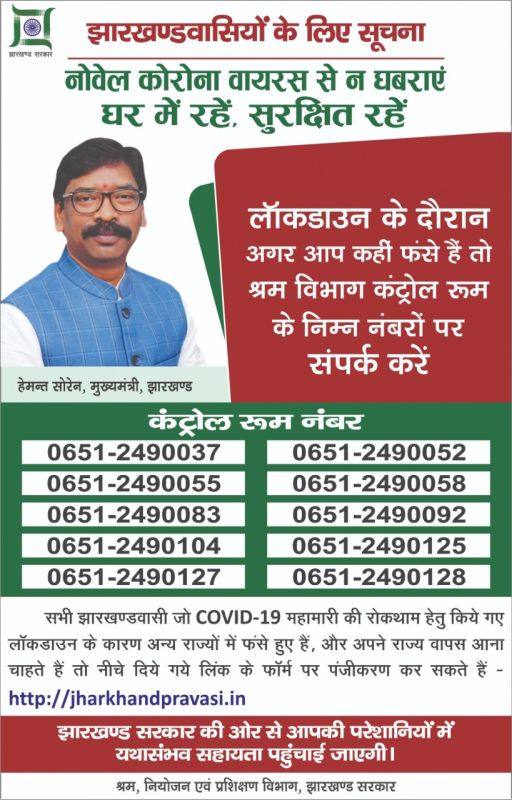 Info based picture for stranded people of Jharkhand

Chief Secretary has issued SOP (Standard Operating Procedure) for the return of stranded people of Jharkhand.

These are the SOP guidelines for stranded Jharkhand workers across the country.

◆ Online Jharkhand Travel Registration Letter http://jharkhandpravasi.in/ has been issued by the state government on which stranded Jharkhand residents are registering themselves. Deputy Commissioners of all districts to provide government assistance to the registered people.

◆ State-level nodal officers will coordinate with the concerned state for the return of people by rail, they will make a proper list of passengers, arrangements for screening and arrangement of buses to their district.

◆ District level nodal officers will coordinate with the respective states for the return of people from buses, they will make the list of passengers and ensure their screening after returning to the district and all arrangements for sending them to home quarantine or government quarantine.

◆ Keep a complete list of all the people coming back to their district.

◆ No one is allowed to go to their home in case their home falls in the containment zone.

◆ It is necessary to completely sanitize all vehicles before and after each journey.

◆ Travelling by bus should be done during day time as far as possible.

◆ In the situation of home quarantine of migrant laborers, the representative and head of the Panchayat will be appointed for social policing who will ensure assistance, quarantine and social distancing of the people.

◆ Passes will be issued by DC to those who want to return to other states by private vehicles.

◆ Before issuing the pass, it shall be ensured that the person concerned has completed his quarantine period and ensure that no report is waiting for Covid-19 test.

◆ Such passes will be invalid in the Containment Zone.

◆ Those people stranded outside Jharkhand who want to come back by their own vehicles, the Deputy Commissioner will issue NOC for Inter-State Movement.