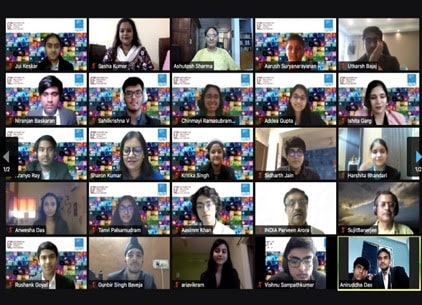 Prof. Ashutosh Sharma, Secretary, Department of Science and Technology (DST), Government of India, virtually interacted with the 26 winners of the Initiative for Research and Innovation in STEM -IRIS National Fair, who participated as ‘Team India 2021’ in the Regeneron International Science and Engineering Fair (ISEF). These students have competed with 1833 budding scientists from 64 countries, regions, and territories across the globe and won 17 awards.

“Creativity is connecting dots of knowledge. Our aim should be to become a creative thinker with some nonlinear expertise and to reach out to connect the dots,” Prof. Sharma said at the occasion. He went through all the projects and complimented the winners on the research they had conducted. Also present on the occasion were Dr. Praveen Arora, Head NCSTC, Department of Science and Technology; and Mr. Sujit Banerjee, Scientist F, Department of Science and Technology, Government of India.

Ms. Sharon E. Kumar, Fair Director IRIS and Chief Operations Officer, EXSTEMPLAR Education Linkers Foundation, said that IRIS is a platform which celebrates the journey of innovation. The success of programs such as IRIS brings accolades back home and gives an opportunity to young students to showcase their scientific talent at the international stage.

IRIS National Fair was held virtually this year and saw participation from more than 65,000 students and science enthusiasts, wherein the projects represented a wide range of scientific disciplines and were judged under 21 categories. Each project went through a stringent judging process to select Team India 2021. The team was subsequently mentored by the IRIS Scientific Review Committee members to prepare it for participation in ISEF.

‘IRIS National Fair’ is a program of EXSTEMPLAR Education Linkers Foundation; funded by Broadcom and supported by the Department of Science and Technology (DST), Government of India. School students based in India in the age group 10 to 17 with innovative projects can participate in it responding to invitations for applications.

To ensure that the best quality projects from across the country represent India and compete on an international platform, the best-performing students from these fairs are encouraged to participate in the IRIS fair. Selected National Award-winning projects from each of these fairs are invited to participate in Mentoring and Evaluation Camps. They are motivated to develop their projects to meet international standards, after which 5 projects per fair are selected for the IRIS National fair as lateral entries. A 70: 30 model is followed whereby 70 percent of the students are selected from the open competition and 30 percent from among the best 5 in the other fairs.