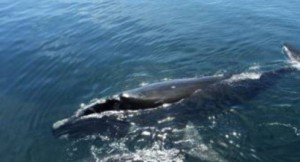 Proteins that allow deep-diving whales to remain active while holding their breath for up to two hours could help create life-saving synthetic blood for human patients, researchers, including one of Indian-origin, suggest.

Researchers compared the muscle protein myoglobin from humans, whales and other deep-diving mammals.

Myoglobin holds oxygen for ready use inside muscle cells, and the study found that marine mammals have ultra-stable versions of myoglobin that tend not to unfold.

The researchers found that stability was the key for cells to make large amounts of myoglobin, which explains why deep-diving mammals can load their muscle cells with far more myoglobin than humans.

“Whales and other deep-diving marine mammals can pack 10-20 times more myoglobin into their cells than humans can, and that allows them to ‘download’ oxygen directly into their skeletal muscles and stay active even when they are holding their breath,” said John Olson, professor at Rice University in US.

“The reason whale meat is so dark is that it’s filled with myoglobin that is capable of holding oxygen. But when the myoglobin is newly made, it does not yet contain heme,” Olson said.

“We found that the stability of heme-free myoglobin is the key factor that allows cells to produce high amounts of myoglobin,” he said.

Researchers want to create a strain of bacteria that can generate massive quantities of another protein that’s closely related to myoglobin.

Hospitals and trauma specialists currently rely on donated whole blood, which is often in short supply and has a limited storage life. Olson’s goal is to create synthetic blood for use in transfusions.

The researchers developed an in vitro method for testing myoglobin expression outside of living cells, that allowed them to carefully control all the variables, Olson said.

“We found that the amount of fully active myoglobin expressed was directly and strongly dependent on the stability of the protein before it bound the heme group,” he said.

The globin family of proteins is shaped around a pocket where heme is stored. The heme pocket opens and closes to trap and release oxygen.

Premila Samuel, a graduate student at Rice University, said the heme-free form of myoglobin that she studied is called apoprotein or apomyoglobin.

“The more stable the apoprotein, the more final product we could make,” she said.

“Human apomyoglobin isn’t very stable at all compared to that of the diving mammals, which have versions of the apoglobin that are up to 60 times more stable than ours,” Samuel said.

The study was published in the Journal of Biological Chemistry.