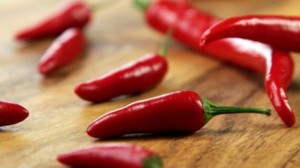 Consumption of hot chilli may prevent overeating by acting on nerves in the stomach, a finding which may lead to new treatments for obesity, scientists say.

University of Adelaide researchers have discovered a high-fat diet may impair important receptors located in the stomach that signal fullness.

Researchers from the university’s Centre for Nutrition and Gastrointestinal Diseases investigated the association between hot chilli pepper receptors (TRPV1) in the stomach and the feeling of fullness, in laboratory studies.

“The stomach stretches when it is full, which activates nerves in the stomach to tell the body that it has had enough food. We found that this activation is regulated through hot chilli pepper or TRPV1 receptors,” said Associate Professor Amanda Page, Senior Research Fellow in the University of Adelaide’s School of Medicine and lead author on the paper.

“It is known from previous studies that capsaicin, found in hot chillies, reduces food intake in humans,” said Page.

“And what we’ve discovered is that deletion of TRPV1 receptors dampens the response of gastric nerves to stretch – resulting in a delayed feeling of fullness and the consumption of more food,” she said.

“Therefore part of the effect of capsaicin on food intake may be mediated via the stomach. We also found that TRPV1 receptors can be disrupted in high fat diet induced obesity,” she said.

Dr Stephen Kentish said these findings will inform further studies and the development of new therapies.

“It’s exciting that we now know more about the TRPV1 receptor pathway and that the consumption of capsaicin (an active component of chili peppers) may be able to prevent overeating through an action on nerves in the stomach,” said Kentish, National Health and Medical Research Council (NHMRC) Fellow from the University of Adelaide’s School of Medicine.

The study was published in the journal PLOS ONE.