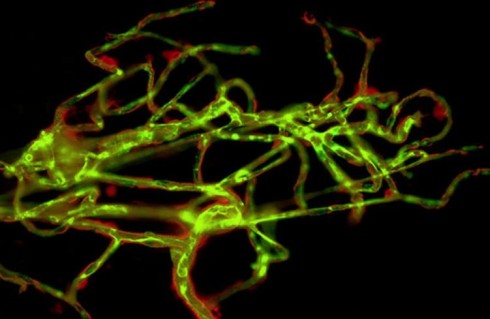 A special protein in the brain’s tiniest blood vessels may affect people’s risk of suffering a stroke, a new study has found.

The research led by Peter Carlsson, professor in genetics at the University of Gothenburg in Sweden, studied how the blood-brain barrier develops and what makes the capillaries in the brain different from small blood vessels in other organs.

The brain’s smallest blood vessels differ from those in other organs in that the capillary walls are much more compact.

The nerve cells in the brain get the nutrients they need by molecules actively being transported from the blood, instead of passively leaking out from the blood vessels.

This blood-brain barrier is vital, because it enables strict control over the substances with which the brain’s nerve cells come into contact. It has a protective function that if it fails, it increases the risk of stroke and other complications.

The smallest blood vessels, the capillaries, have a type of cell called pericytes. These are essential to the development of the blood-brain barrier.

Pericytes are also found in other organs, and researchers have previously been unable to find out what gives the brain’s pericytes this unique ability.

The new study found that the brain’s pericytes contain a protein, FoxF2, which is not present in the pericytes of other organs, and which coordinates the changes that make the blood vessels compact.

FoxF2 is needed in order for the blood-brain barrier to form during foetal development.

“Mice that have too little or too much FoxF2 develop various types of defects in the brain’s blood vessels,” said Carlsson.

In humans, researchers have noted that major changes in a region of chromosome 6 have been associated with an increased risk of stroke, but it has not been known which of the genes in the area are responsible for this risk.

“The FoxF2 gene is an extremely interesting candidate, as it is located right in the middle of this region, and research is under way now in collaboration with clinical geneticists to investigate the extent to which variations in the FoxF2 gene affect people’s risk of suffering a stroke,” said Carlsson.

The study was published in the journal Developmental Cell.