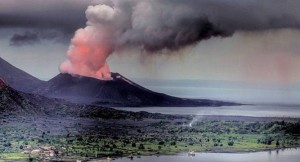 Volcanic eruptions may have slowed down global warming by injecting particulates into the atmosphere, according to a study.

Volcanic aerosols have acted during the last 10 years as a natural umbrella to slow down global temperature increase from greenhouse gases, researchers said.

Although global concentration of greenhouse gases in the atmosphere has continuously increased over the past decade, the mean global surface temperature has not followed the same path.

A team of international researchers, including Karlsruhe Institute of Technology (KIT) scientists, have now found an explanation for this slowing down in global warming.

The incoming solar radiation in the years 2008-2011 was twice as much reflected by volcanic aerosol particles in the lowest part of the stratosphere than previously thought, researchers found.

According to the study led by the University of Lund, Sweden, the cooling effect due to volcanic eruptions was clearly underestimated by climate models used for the last Intergovernmental Panel on Climate Change (IPCC) report.

Since more frequent volcanic eruptions and the subsequent cooling effect are only temporary, the rise of Earth’s temperature will speed up again, researchers said.

The reason is the still continuously increasing greenhouse gas concentration, they said.

In the first decade of the 21st century, the average surface temperature over the northern mid-latitude continents did increase only slightly.

This effect can be now explained by the study on volcanic aerosol particles in the atmosphere.

The study uses data from the tropopause region up to 35 km altitude.

The tropopause region is a transition layer between the underlying wet weather layer with its clouds (troposphere) and the dry and cloud-free layer above (stratosphere).

“Overall our results emphasise that even smaller volcanic eruptions are more important for the Earth’s climate than expected,” researchers said.

The study was published in the journal Nature Communications.