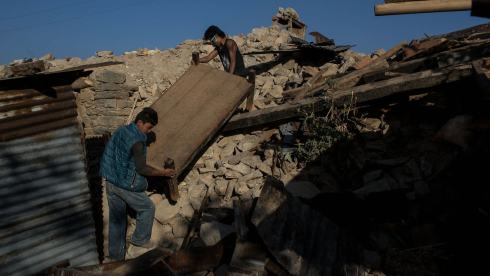 The recent disaster in Nepal which has been a serious tragedy for the lives of mankind is on the brim. A lot of people have perished under the rubbles.Side by side, it has also helped the development of some high graded technological devices in order to prevent this kind of natural disaster.

NASA has long been lending a helping hand in playing many roles such as in exploration, protecting the astronauts, discovering the unknown and even improving the conditions for saving the hum life.

Thanks to the Department of Homeland Security’s Science and Technology Directorate and NASA’s Jet Propulsion Laboratory,a device known as “Finder” (Finding Individuals for Disaster and Emergency Response) have been used along with microwave-radar technology to detect the heartbeats of the trapped victims in this adversity.

Till no, two of these devices have been brought for this benevolent effort to save lives in Nepal.

This device has previously been able to detect heartbeats through 30 feet of debris, 20 feet of concrete and from 100 feet away in the open air. It can also locate the exact location of a person live, from a 5 foot range. The device is still in its prototype mode, as said by the developers and can easily tell the difference between animal and a human heartbeat, thus saving a lot of time and effort.

NASA is all set to go commercial with this device, especially to use it in disaster management of the sort that has currently happened in Nepal. “The true test of any technology is how well it works in a real-life operational setting”, as said by DHS under Secretary for Science and Technology, Reginald Brothers has indeed been proved to be true.