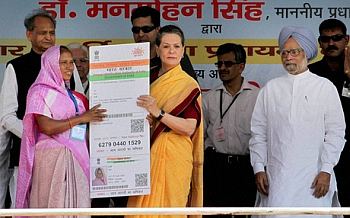 I met Shayma Jannat at Ratu,in Ranchi.This was over two years ago when UIDAI’s then Director General Ram Sevak Sharma,now Jharkhand Chief Secretary, had launched its pilot project to use Micro ATM of the Bank of India to make payment to the beneficiaries of MNREGA and social security schemes such as old age pension and scholarship.

I recall the same evening I received a mail from Jannat stating this.”It was such a pleasure meeting you yesterday! I was very excited to see how keen you were about talking to the beneficiaries and obtaining a comprehensive picture about the UID initiative– it is also my goal as a researcher. I have provided my brief insight below– please do send along the article once it is published- I am sure it will be extremely useful for my Harvard research,”she wrote.

Later,in response to a mail sent by me,she mailed her asessment of the UIDAI project in these words:

“I have been learning about and studying Aadhar for the past five months as a graduate student at the Harvard Kennedy School of Government.

Let me be candid and tell you that I am probably the first person to be skeptical about new international development schemes. Admittedly, when I first learned of Aadhar, I had my concerns, particularly given that it is such a large-scale initiative.

However, after spending the last few months delving into the intricacies of how UIDs are operationalized and the past several days in Jharkhand physically seeing the fruits of it, I am excited and sincerely optimistic.

Let me tell you why. In order for an initiative as large-scale as Aadhar to be effective and sustainable, all stakeholders (particularly banks and individual beneficiaries) have to express literacy of and demand for the product.

I have spent the past few days talking to as many of these stakeholders as possible, and I’ll tell you: the demand is there. People may not fully understand the intricacies of the technology and financial inclusion model of UIDs, but they do understand that that 12-digit number and card that they receive is something real, permanent, and unique to them via their fingerprints. The demand is there from banks, given that through biometric technology and online authentication, UIDs reduce banks’ transactions costs (via lower customer acquisition costs and ID verification processing time) and ensure security and transparency. I believe UIDs have a real potential to transform financial inclusion in India.

Let’s take NREGA payments as an example. Prior to receiving their UIDs, many of the individuals with whom I talked in Ratu had to collect their payments from the local Post Office. During my interviews, I listened to their grievances about the opportunity costs of travel to the Post Office, long lines, and the extended waiting period of ID authentication and payment processing. After obtaining their UIDs, however, they expressed that they could rely on a more efficient process and more timely payments, which, in the words of more than a few individuals, reinforced their incentive to work. This is an inspiring narrative for me.

Aadhar is the world’s largest biometric citizen database ever to be attempted. This is enough to make anyone doubt its potential impact and success. I recognize the risks and challenges associated with an initiative of such scale and technological innovation. But I have also witnessed that while seemingly intricate and complex in design, in their delivery UIDs are remarkably simple and user-friendly. This is the genius of Aadhar. As for those critics who doubt that such an ambitious and innovative project could ever succeed, I’ll posit that during the visionary stage of Dr. Yunus’s Grameen Bank, people probably found the notion of making the poor in Bangladesh “bankable” through microfinance just as ludicrous. Let’s have a little faith, people.